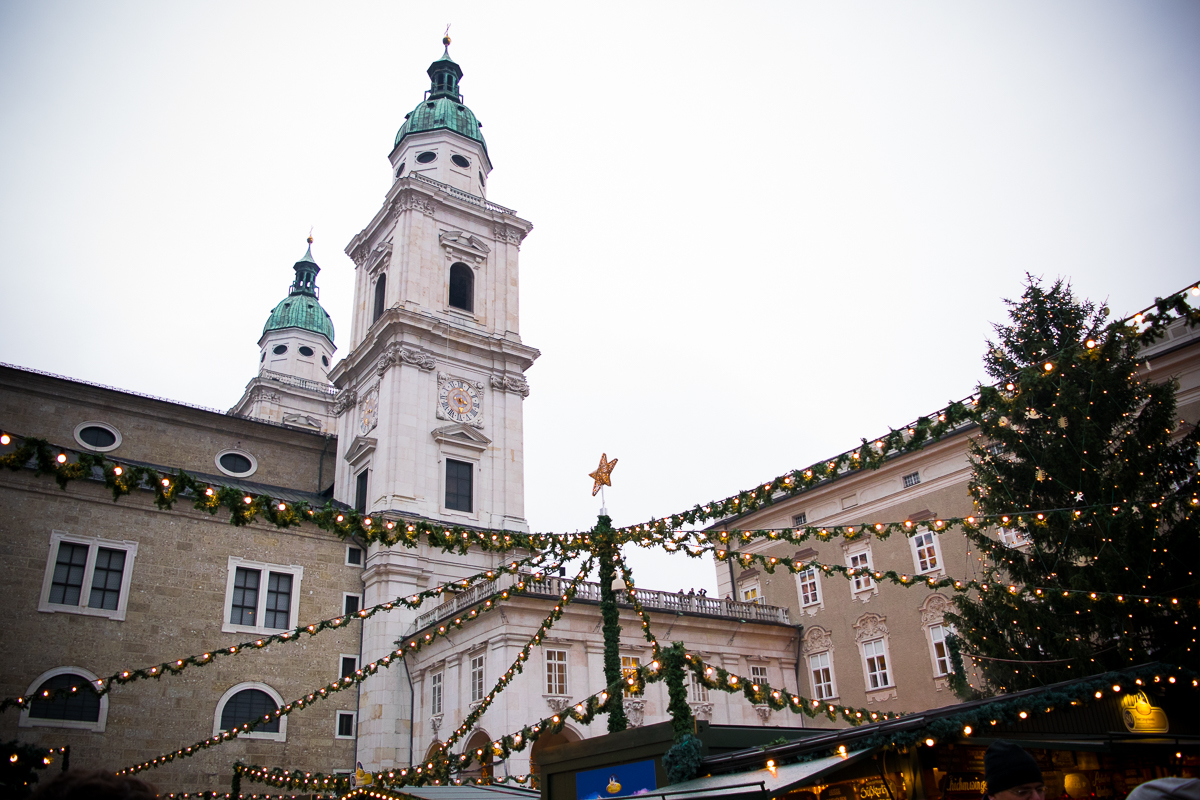 In the last two weeks, I’ve been to Christmas markets in Paris, France; Stuttgart, Germany; Salzburg, Austria; Copenhagen, Denmark; and Barcelona, Spain. Every major European city, and I believe most of the smaller ones too, has its own Christmas/holiday market. Each one is a little different. Here are some highlights of the ones I saw:

Paris has quite a few Christmas markets. The most famous one (and the one I went to) is on the Champs-Elysées. What I liked about this one was that they organized all the stalls by what they were selling, so you could choose which “villages” to visit based on what you were looking for. I went a few times, once to visit the artisan’s market, once to visit the local goods/clothing/jewelry market, and once just to have lunch at the “gourmet foods village” with a friend.

The gourmet foods market was probably my favorite. How can you go wrong with stand after stand of the best French cheese, soups, pastries, and homemade meals? Unable to choose between the French onion soup (though in France, it’s just called onion soup) and a raclette sandwich, we opted for both and split them. Both were absolutely incredible: warm, savory and satisfying. Even though that day happened to be Thanksgiving, in that moment I didn’t miss American food at all.

I also some Christmas shopping for my family and found some lovely things! They read this blog, so I won’t say what I got (yet), but there are plenty of options. If you’re in Europe anytime from mid-November through the Christmas holidays, these Christmas markets are a great place to find gifts for family and friends. You’re pretty much guaranteed to find something fun, unique, inexpensive (and locally made!), without resorting to cheap, ordinary souvenirs like those Eiffel-tower covered scarves of highly questionable fabrication. Keychains say “casual acquaintance.” Handmade silk scarves created right there in Paris by a local designer say “you’re important to me.” And a wheel of French cheese says “I must love you very very very much to even consider sharing this with you.” Or, at least, that’s what it would say if it were me bringing one back!

I had two hours in Stuttgart on my way to Austria. I can’t say much for the rest of the city (because I haven’t seen it), but the Christmas market just down the street from the train station was great! While the Paris market was more about shopping and showcasing, the Stuttgart market was more of a family-oriented social event. There were stalls selling local goods (from which I chose another gift or two), and there were definitely plenty of buyers too, but most people seemed to be there to socialize.

There were games and activities for the kids, and the main attraction was a temporary outdoor ice skating rink. As I walked from the train station to the edge of the market, I passed a number of parents leading their kids home, balloons and cotton candy in hand.

The stands were selling all kinds of food and treats, from chocolate covered fruit, to candied nuts, to bratwurst, to some kind of a potato thing with sauerkraut (I’m still not sure what it’s called, but I saw some people eating it and ordered one to try), to soups, to hot wine and coffee and hot chocolate, to roasted chestnuts, to bread and pastries. While not as big as the Paris market, it was the perfect way to spend a two hour layover between trains.

Oh, Salzburg! First of all, being in this city itself was like stepping into a fairy tale. It seemed unreal! By the time I went, during the last few days of November, all the holiday decorations were up, and the Christmas markets in full swing. I say markets, not just market, because there were a couple of different ones. The best was by the DomQuartier, outside the cathedral.

There were stands lining both the inside and the outside of the square, and what I liked was that you could walk through and see every stand without having to double back and retrace all your steps. It was set up to be basically 2 concentric circles in each square, with a few shops lining the passage between the squares. Very centralized, very easy to navigate.

The food in Salzburg was incredible as well, and the stalls were a great way to try a lot of authentic things for fairly low prices. I tried bratwurst, pretzels, a few different pastries, a chocolate covered banana, sandwiches and soup. What I really liked about this Christmas market was that whenever you ordered food, they served it to you with actual plates and silverware. Not disposable stuff. When you’re done with your food or your hot chocolate or whatever, you bring the dishes back to the stand you got it from, and they wash them and reuse them. So, it’s local food with next to no waste. What could be better than that? (Except, perhaps, an entire market of French cheese).

On my last morning in Salzburg, when I went to see the DomQuartier baroque museum, I had to pass through the Christmas market again. And it snowed! It was the first snow I’ve seen this year, and it was perfect. Big, white, fluffy flakes of snow, dusting a Christmas market in Austria, while a choir sang Christmas songs on the steps of the cathedral. I believe that was the moment when I fell in love with Austria.

Now, Copenhagen knows how to do a Christmas market. They have one in the main shopping area near Norreport station. They have another over by Nyhavn. But the best one of all is nestled into my absolute favorite thing I saw while in Denmark: the Tivoli gardens.

The Tivoli gardens are also home to the second oldest amusement park in the world. I’m working on a post that just talks about the gardens, but I’ve got to give a little shout out here to the Christmas market inside. For Christmas, Tivoli is decked out with lights and music, and little shops selling handmade wool clothing and accessories, holiday treats and gifts.

If you get hungry, the culinary options are endless. I circled the park twice just scoping out the options, unable to choose, until I finally settled on a few different things. Fish and chips, hot chocolate, a candied apple. Like Austria, Tivoli vendors give out their drinks in plastic cups which you then return to a machine which gives you 5 DKK (a little less than one dollar) in exchange. The cups are then washed and reused.

Christmas markets in Spain are pretty much dominated by the little figures for the traditional Belén, which is a nativity scene. These go way beyond normal nativity scenes, though. A typical nativity in the United States would have a baby Jesus, Mary, Joseph, three wise men, and some various angels, shepherds and animals.

A Spanish Belén, though, is a whole entire city, and it expands each year! Some families will go all out with their displays, making them interactive and dynamic. I remember one year, a friend of mine from near Sevilla created a display that ran along an entire wall in her living room. It included a running stream of water, real sand, hundreds of figures, houses on hills and in valleys, and every kind of villager imaginable. On the first day of December, she placed the three wise men at the bottom of the path that led to the stable on the other end. As the days progressed, she moved the wise men up the path. On December 25, she placed the baby Jesus in his manger. And on the day of the Kings, celebrated on January 6, the three wise men finally reached the miniature stable.

In the Christmas markets, you can find pieces ranging from traditional nativity figures, to famous soccer players, to politicians, to village folk including milkmaids and farmers. Every Belén also has a little figurine called a caganer, which means “pooper,” and is exactly what you think it is.

The Barcelona market itself is in the city center, near the cathedral (not the Sagrada Familia, but the Barcelona cathedral). I also saw markets in nearby Tarragona (on the rambla) and Reus, and they are very similar, though the Tarragona one also had a booth selling ukuleles.