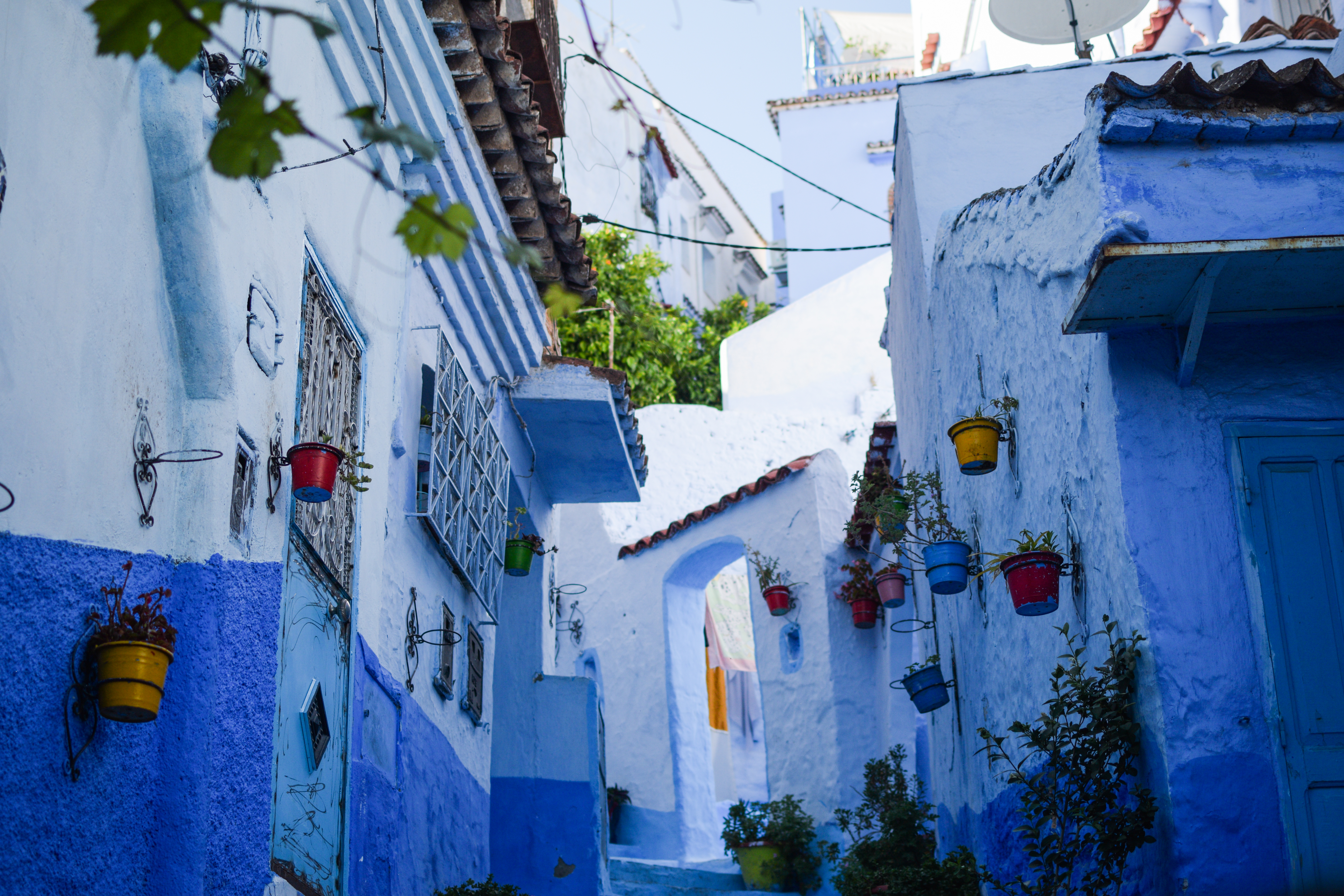 I would place Chefchaouen up there with the white Andalusian villages in Spain as my choices for the most beautiful places to live in the world. Chefchaouen is a relatively small town nestled in the Rif mountains in the northern part of Morocco. The Medina is up on a hill, overlooking the rest of the city. The streets twist and wind up and down through the markets, an endless maze of rugs, blankets, leather products, art and clothing. 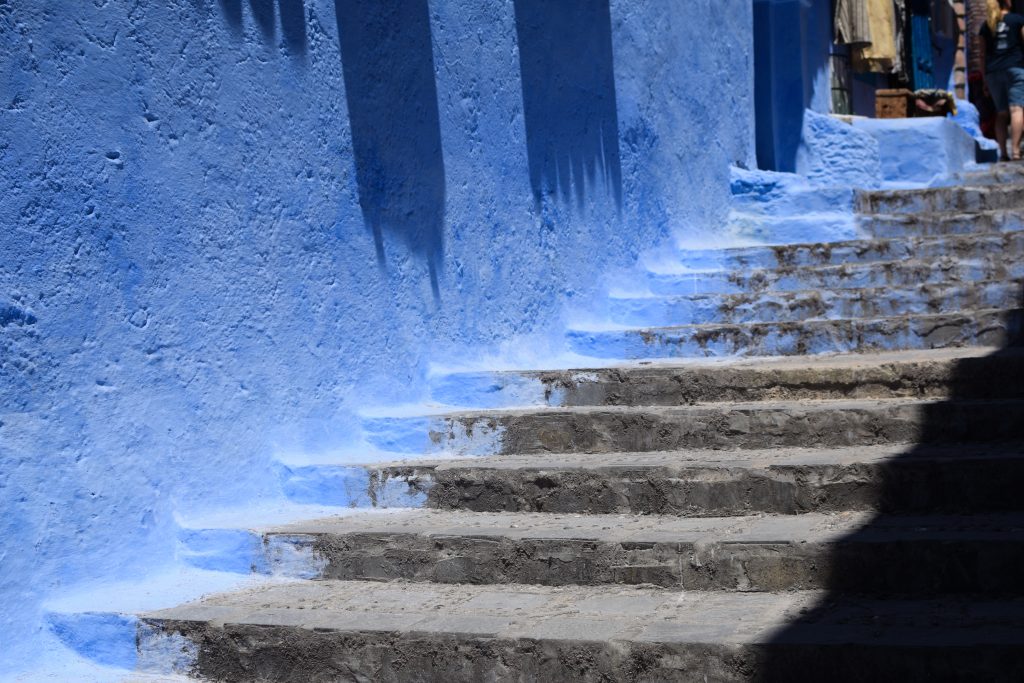 The best part is that everything is various shades of blue. When it was a Jewish city, the inhabitants painted the walls blue to keep the flies away, the logic being that the flies will think it’s water and will stay away from the houses and doors. I don’t know if I believe that, but I didn’t see too many flies while we were walking around. At any rate, it had a calming, cooling effect even in the heat of the summer sun. 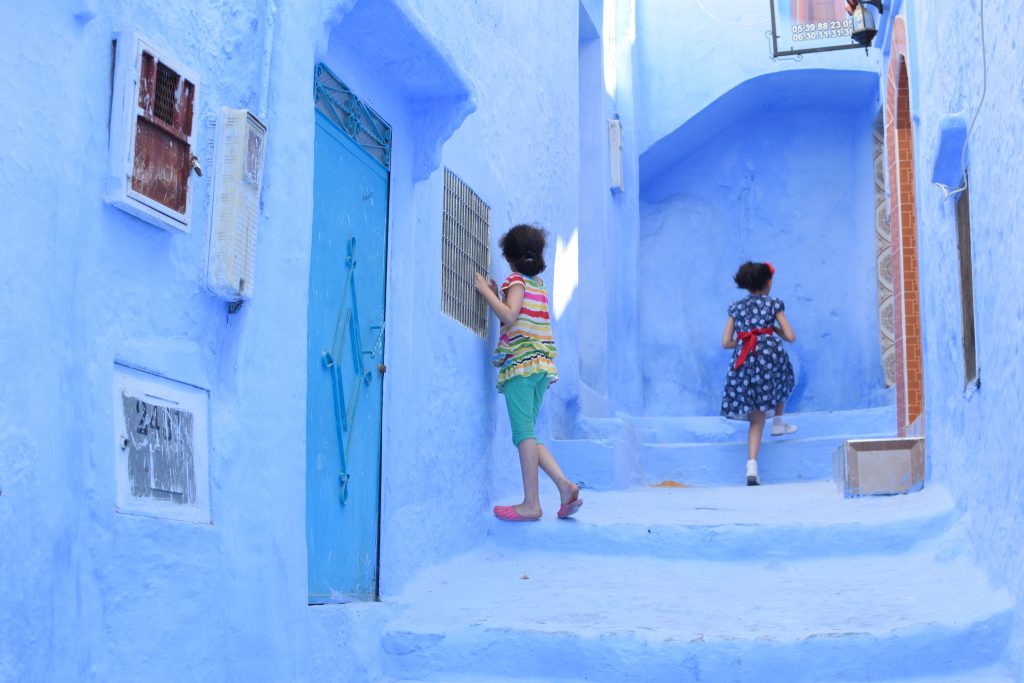 We arrived in the early afternoon, after taking a 4 hour bus ride from Rabat. The bus was fun; all 13 students went, plus our professor, his wife, and 2 of their sons. We got the bus driver to let us put on music, and we listened to jazz, French pop, and musical soundtracks on the way.

When we got there, we took a few minutes to relax at our hotel, the Hotel Madrid, and to have a cup of Moroccan tea while we waited to be checked in and shown to our rooms. After that, we headed into the beautiful blue medina for lunch and a tour. 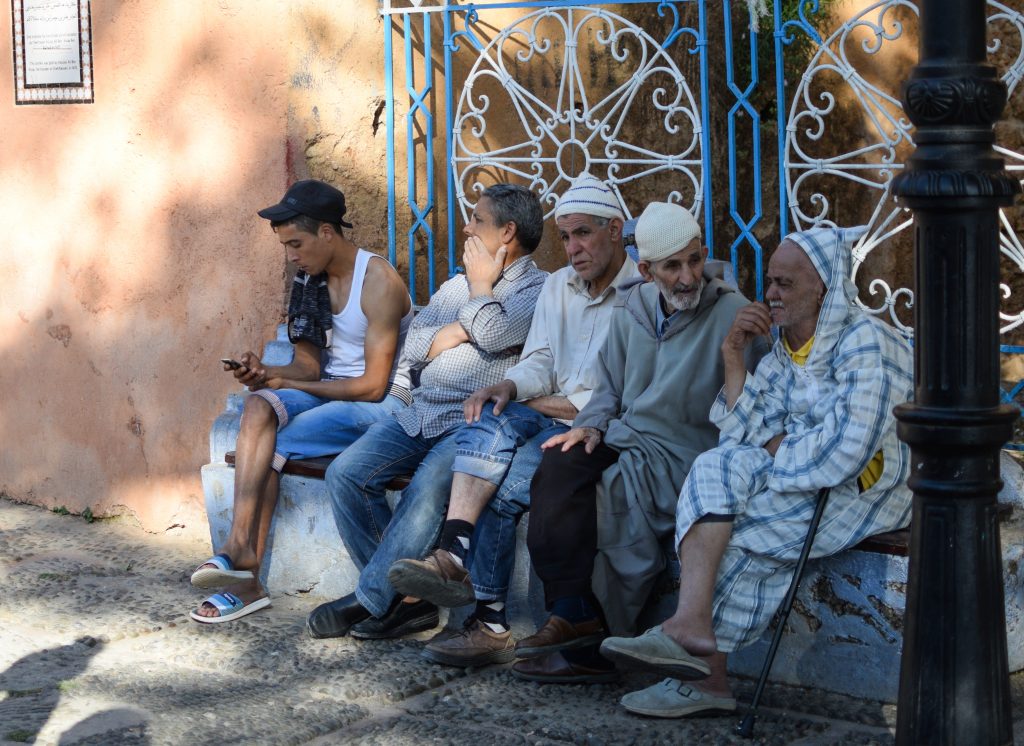 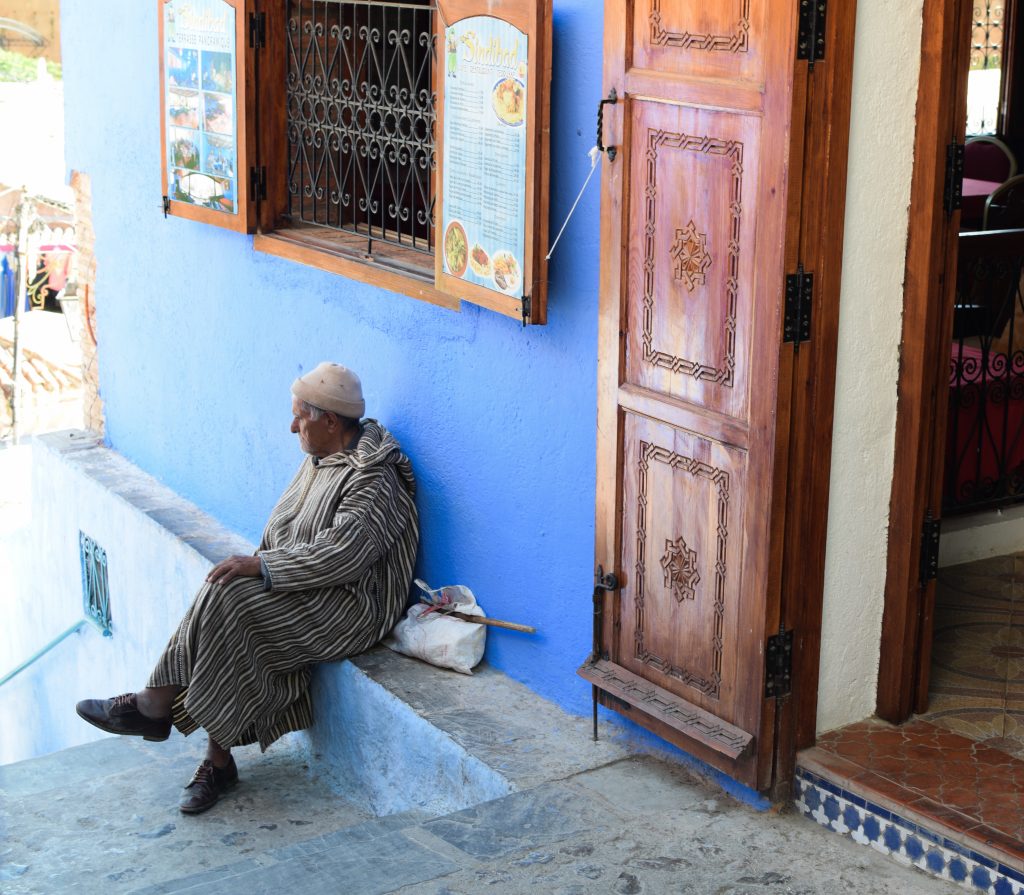 I already said this, but it’s worth saying again: I’ve been in very few cities that I’ve found to be quite as beautiful as this one. I don’t know of any way to describe it other than with a slew of pictures:

Besides the beauty, I was impressed with the markets. I thought they had more variety and more interesting objects than in Fes, and the prices were much cheaper than either Fes or Rabat. I had told myself I wasn’t going to buy anything else, because I really don’t have room in my one carry-on bag, but we found such beautiful and quality things that I couldn’t resist. I bought a dress and a shirt, which they tailored for me for free, and a large handmade wool/cotton blanket that I got for a ridiculously low price after negotiation.

And, just like in Fes, the shadows and the light fascinated me. 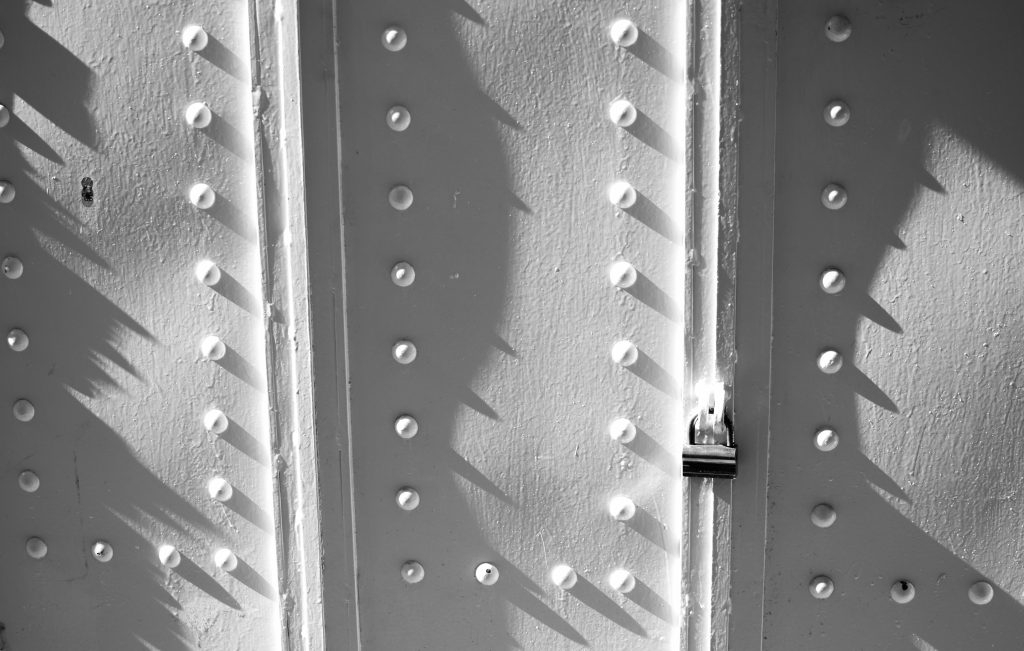 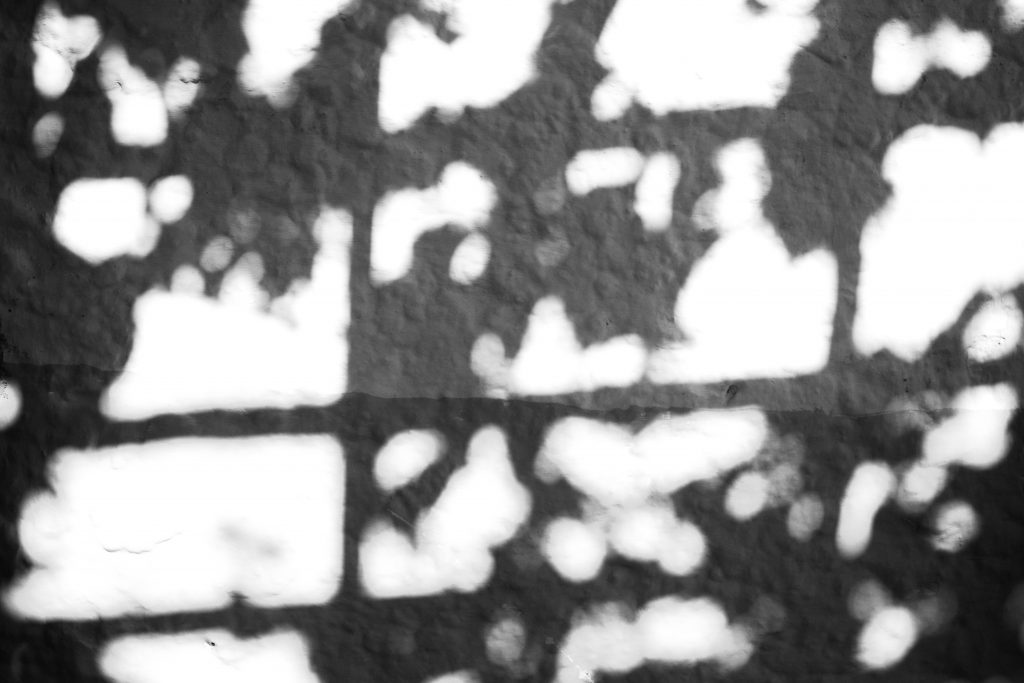 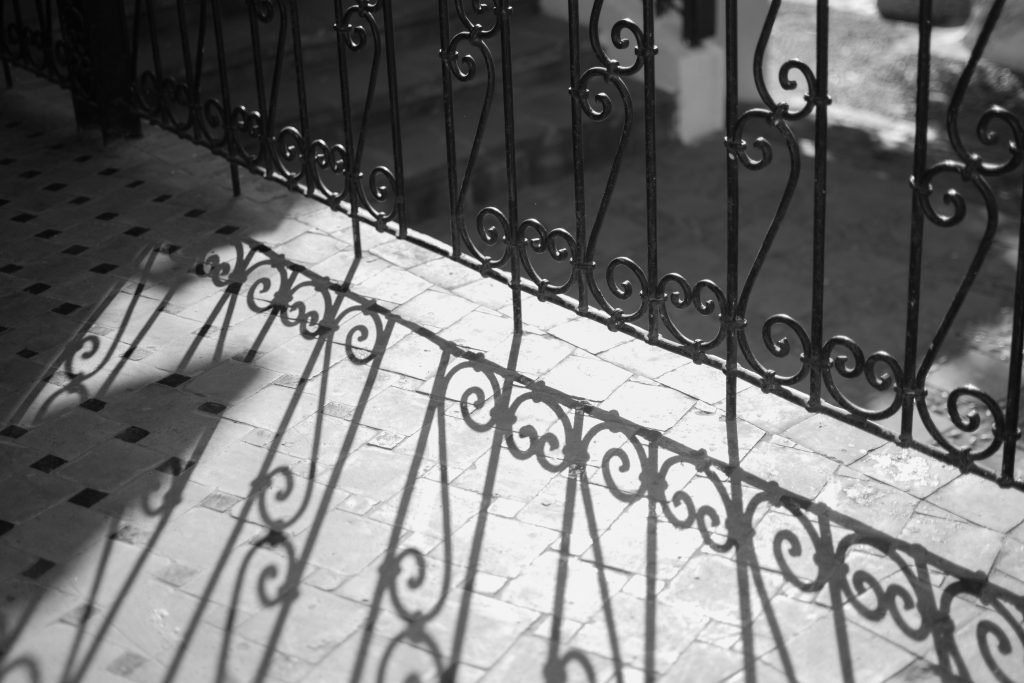 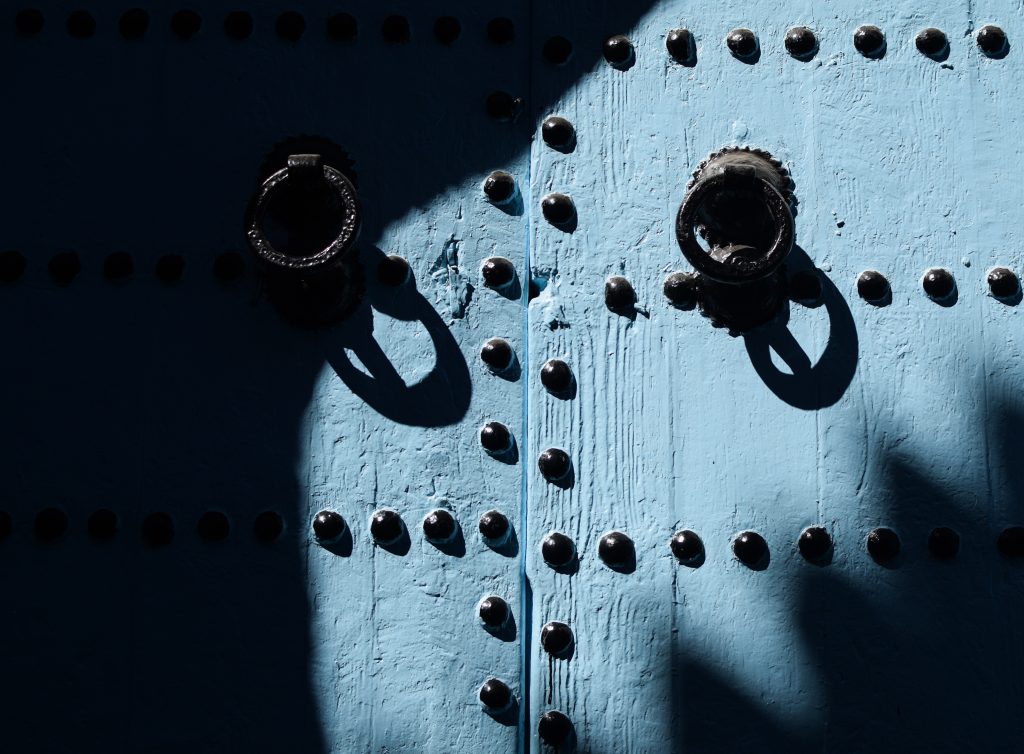 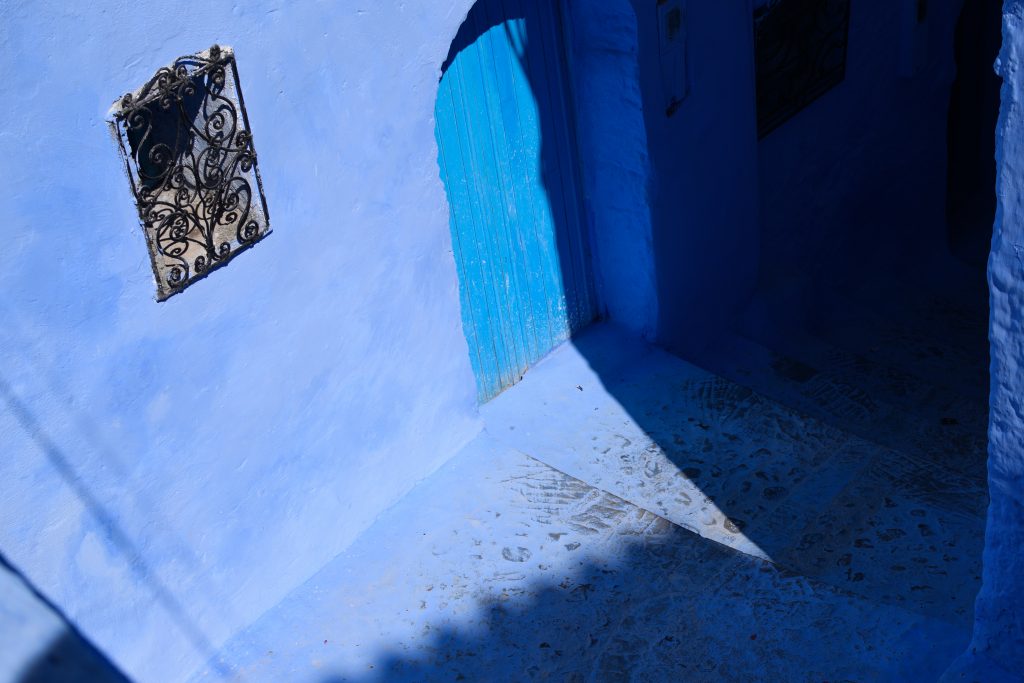 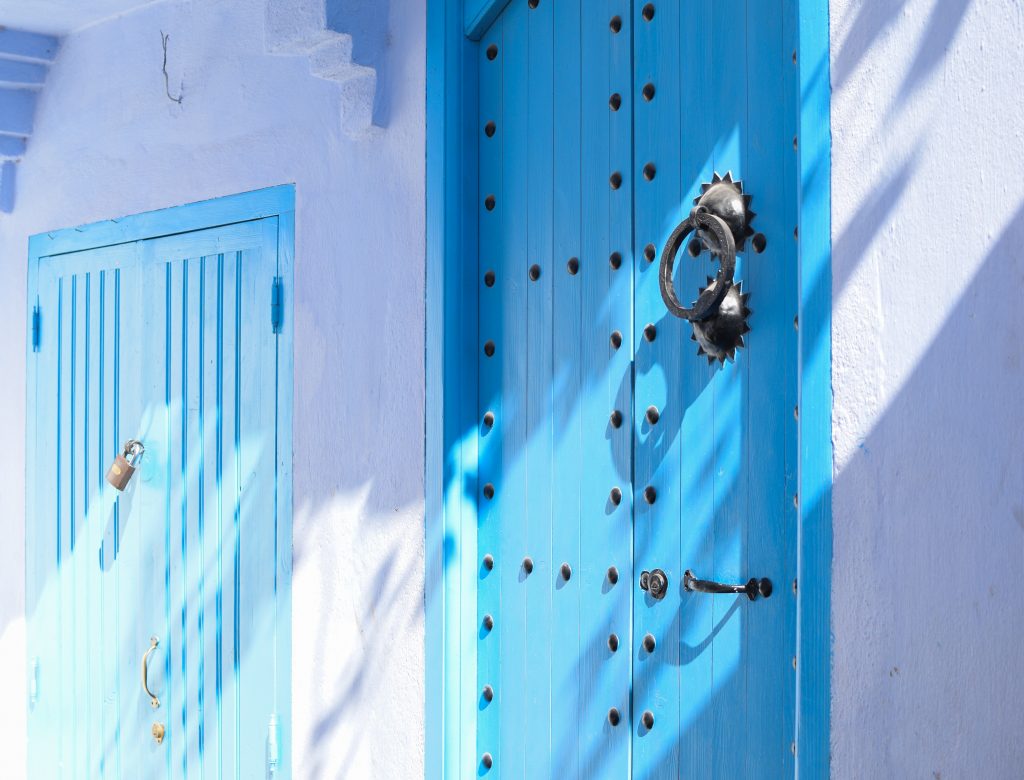 Chefchaouen is interesting because there is a lot of Spanish influence. Our guide told us that in their houses, lots of families native to the region will speak Spanish among themselves instead of Arabic or French. Many of the street signs were also in Spanish. In fact, I sometimes had an easier time communicating with vendors in Spanish rather than French because they understood it better. 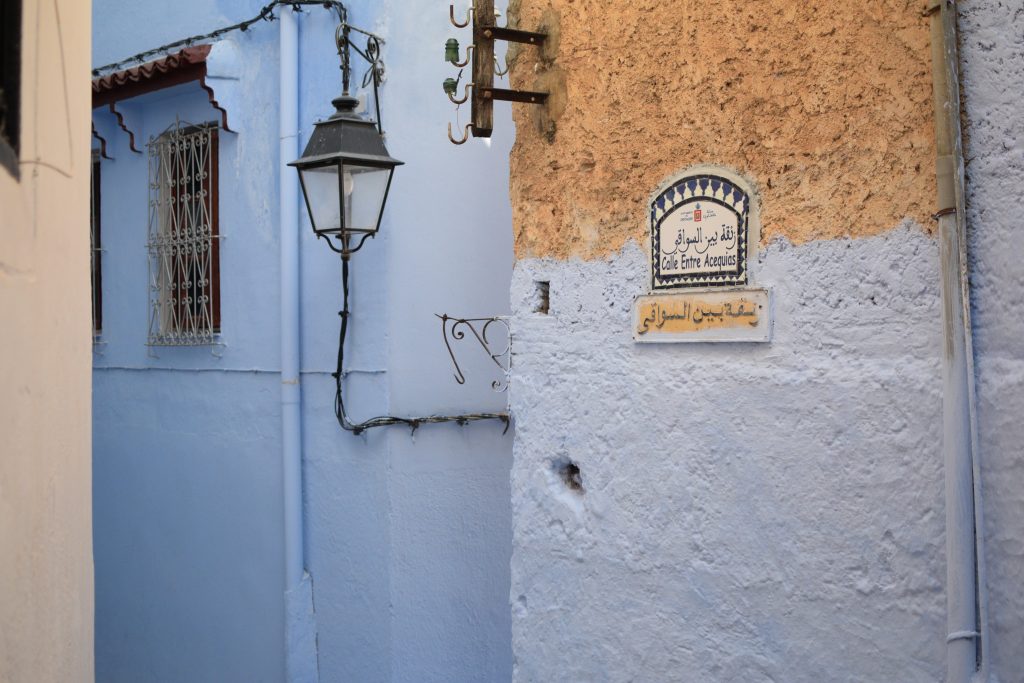 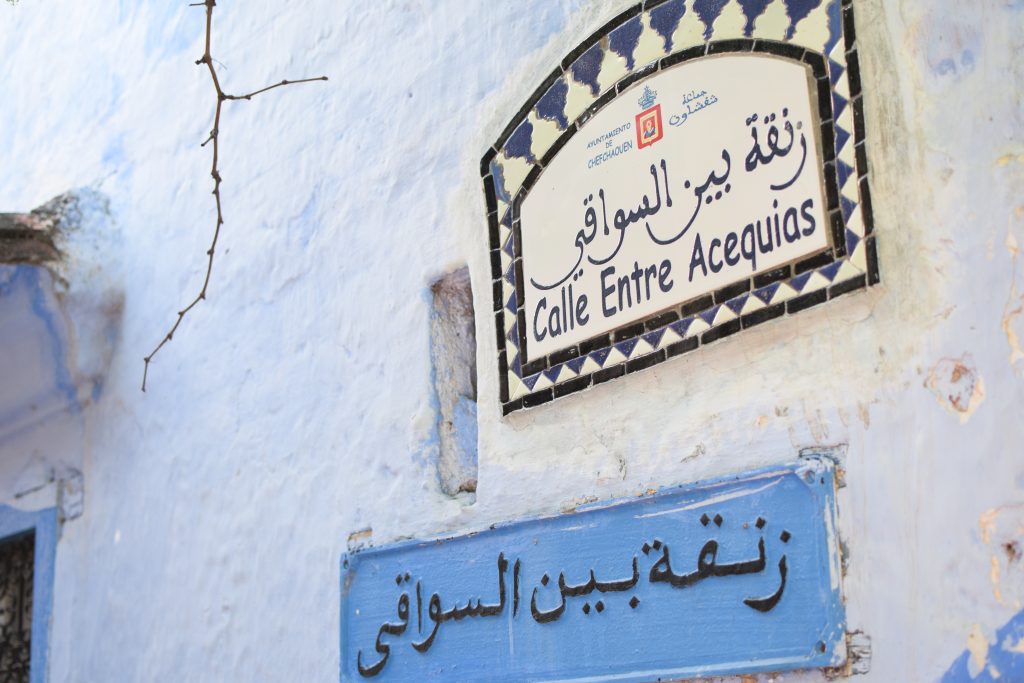 Though so much of the city is blue, it’s certainly not the only color you’ll find there!

That evening, we relaxed and enjoyed our ftour, the meal to break the fast at the end of the day for Ramadan, in which some of the group was participating. We had dates, soup, little sandwiches, little pizzas and bread. We ate until we were full, and then they brought out giant plates of spaghetti. I have no idea how we did it, but we managed to eat almost half of it!

After dinner, some of the group entertained us with an impromptu skit, a monologue from Cyrano de Bergerac, and stories of brushes with fame. 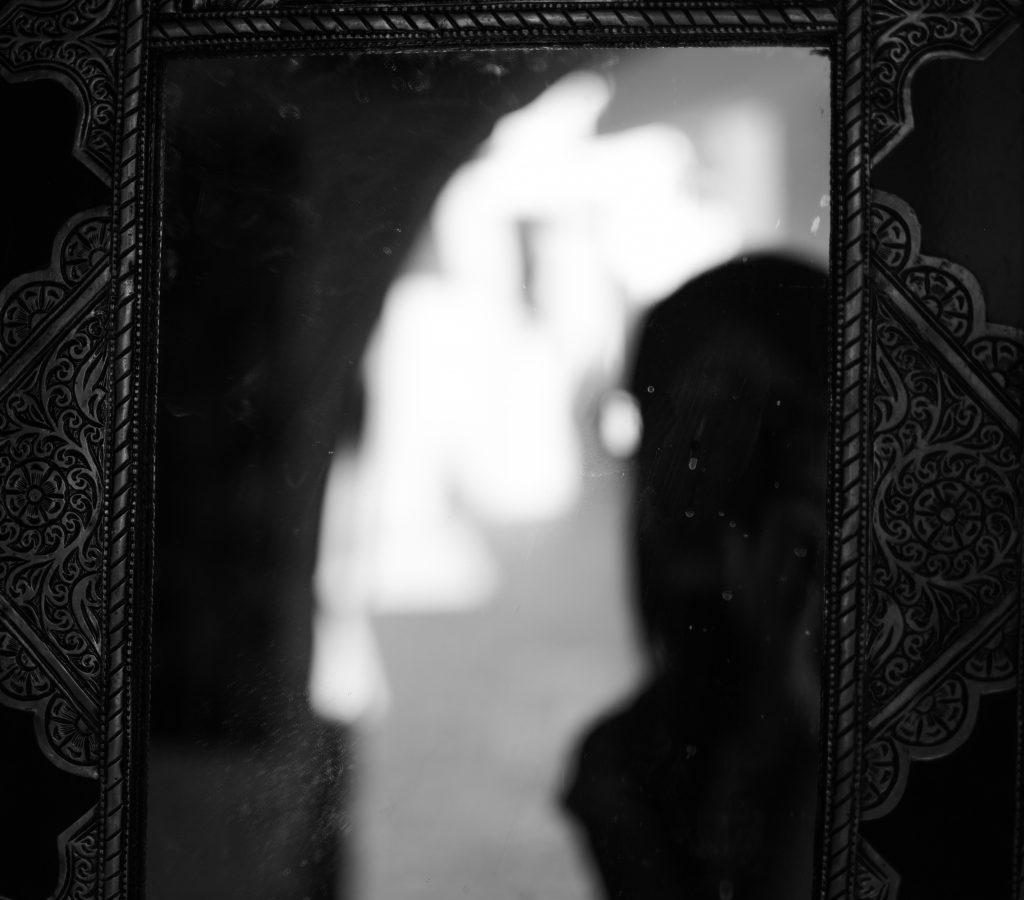 The next day, we took a bus up into the mountains to hike a trail to a place called Pont de Dieu (God’s Bridge). It’s a spectacular rock formation, rising above a crystal clear mountain stream and beautiful blue pools. Almost everyone went swimming, even though the water was icy and a lot of us had to improvise as far as swimming attire . . . I ended up wearing another girl’s shorts and a guy’s T-shirt, and some people were swimming in their underwear. We were pretty much the only people up there, though, so it didn’t really matter.

Unfortunately, I don’t yet have any pictures from the hike because I dropped my camera (the small, cheap one, not my DSLR, thank goodness!) in the stream and I’m waiting for it to dry out before I can try to charge it and salvage pictures. I’m not sure if it got damaged or not, at this point. Oh well. It’s not the worst thing that could have happened! 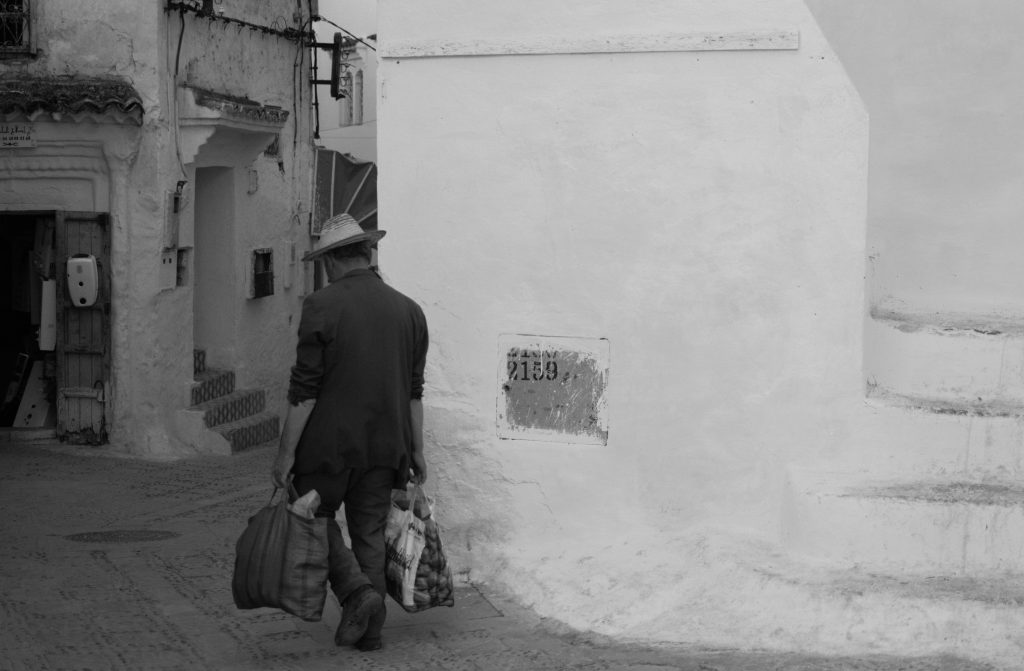 The trip back that evening felt long, but everyone seemed to enjoy it. We arrived back in Rabat late that night, exhausted but content. Whenever I go back to Morocco, no matter where I stay, I’ll be sure to pay another visit to Chefchaouen. It might have been my favorite part of this whole trip!