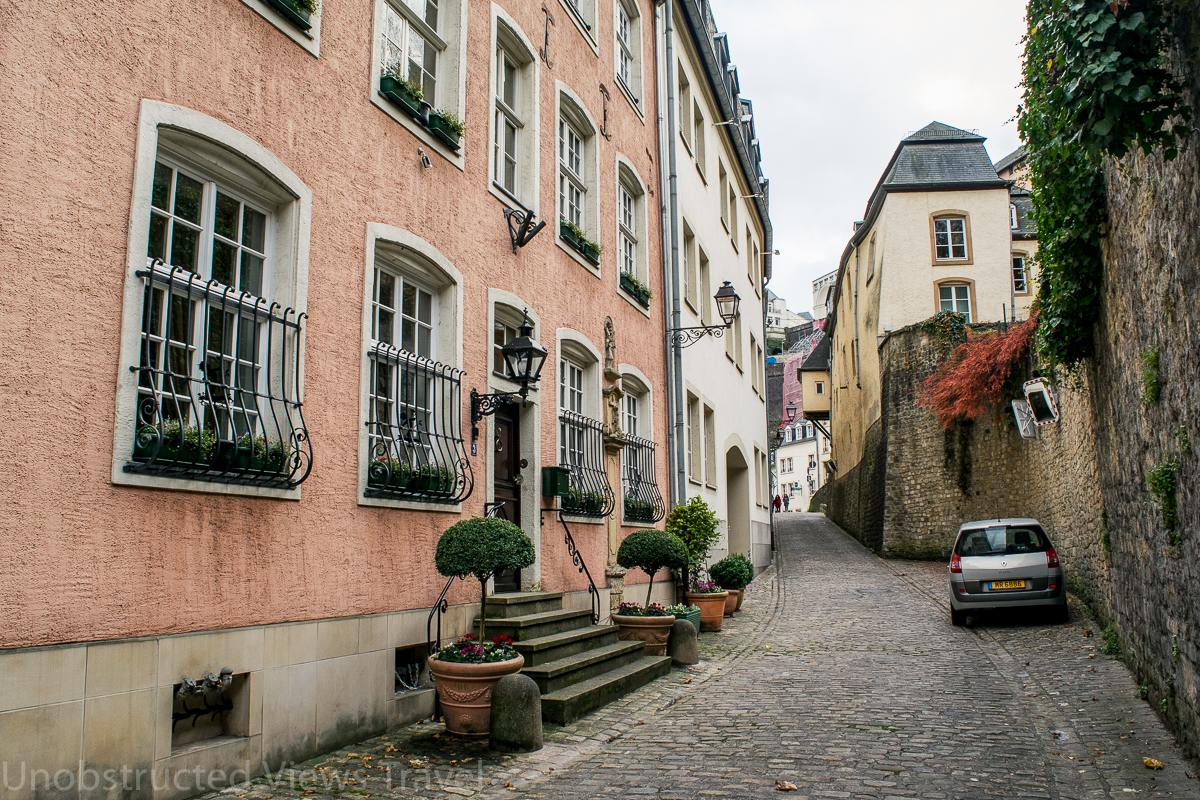 Luxembourg may be smaller and less popular than some of its European cousins like Paris, Amsterdam and Brussels, but if I were to choose a European city to live in, Luxembourg might be the one. It’s beautiful but not too touristy. There is no shortage of places to eat and hang out in the center. The majority of the people who live and work there are international. It’s relatively inexpensive, and the Luxemburgers seem to enjoy a high quality of life.

One day or even a weekend is the perfect amount of time to visit Luxembourg. All of the major attractions can be seen in a day. It’s just two hours from Paris and two and a half from Brussels by train, making it ideal for a short excursion.

Luxembourg is a tiny country ruled by a Grand Duke, making it the world’s last Grand Duchy. The Grand Duke’s palace is in the center of Luxembourg city. It opens in the summer for tours, which I’ve heard are spectacular. Unfortunately, my visit was in late November, so I wasn’t able to go inside.

On the bright side, November has excellent weather for drinking hot chocolate, which worked out perfectly since The Chocolate House is right across from the Grand Ducal palace.

Luxembourg has excellent chocolate. How could it not? It’s surrounded by Belgium, France and Germany, and is just a stone’s throw away (relatively) from Switzerland. The Chocolate House by Nathalie Bonn is one of Luxembourg’s most famous cafés, serving locally made chocolates, home made cakes, and hearty lunch and dinner fare.

A couple of things to note about visiting The Chocolate House: First, it’s usually pretty crowded, and the building is small. The chocolate is worth it though, so don’t let that turn you away. Second, if you want to sit, either upstairs or out on the terrace, you have to order your cakes and hot chocolate downstairs first.

When I ordered my hot chocolate, I was told to choose from a WALL of “chocospoons,” which are basically blocks of solid chocolate on the ends of wooden spoons. There were dozens of flavors to choose from. I passed on the dark mint, orange, pear cinnamon, cognac, and Christmas flavors, among many others, in favor of the almond raspberry.

When you take your seat, they bring you a mug of hot milk. If you don’t want regular milk, you can choose from soy, almond, coconut, and even lactose-free milk or coffee instead. You just swirl the chocolate end of the spoon until it melts. Mine was absolutely delicious.

The best part is that you can easily take some of the hot chocolate with you for friends and family back home. The chocospoons are relatively easy to transport, aren’t too expensive considering the quality, and come in a myriad of flavors. Since the spoons themselves are wooden, you can even re-use them later. I took home three chocospoons for less than 10 euros.

The Chemin de la Corniche and the Bock Casemates

As far as beautiful views go, the Chemin de la Corniche can’t be beat. It’s been called “Europe’s most beautiful balcony,” and there’s good reason for that.

Luxembourg is split into an upper part and a lower part, and the Chemin de la Corniche runs along the edge of the upper portion. Walking along it, you get an exquisite view of an old European city from above. The lower portion is called Grund, and there’s a river that runs along the small cliff separating the two.

If you follow the Chemin starting from the southern end and work your way northeast, you will eventually run into the entrance to the Bock Casemates. They were closed for the winter when I went, but are worth a visit. They are essentially a series of tunnels that weave in and out of the hill, and are open for exploring in warmer seasons.

You can also explore the lower portion of Luxembourg City and get a nice view of the upper town from below.

To get to it, you can either take the paths that wind back and forth along the hill, or you can do what I did (in the interest of time) and take the free public elevator. Just follow the signs (near the southern end of the Chemin de la Corniche) for Grund. They look like this:

When you get off the elevator and out of the short tunnel, you can turn immediately to your left to walk along the river.

Alternately, you can go straight, cross the quaint little bridge (which makes a good photo op) and wander the small streets of Grund. This was one of my favorite things that I did in Luxembourg.

One of Luxembourg’s proudest attractions is the Musée d’Art Moderne, also known as MUDAM. The building itself is reason enough for a visit, even if you don’t like museums or don’t have time to go inside (price shouldn’t be an issue, since it only costs 7 euros, 5 euros with the discount, and is free for students). It was designed by I. M. Pei, the same architect who designed the glass pyramids of the Louvre.

Musée d'Art Moderne (MUDAM) Luxembourg.. designed by I. M. Pei (the same architect who designed the pyramids at the Louvre) inside the historical Fort Thungen. I just love the juxtaposition of old and new, historic and modern. And the musem itself is fascinating! By far one of my favorite things in #Luxembourg 🙂

I tried walking there from the Bock Casemates entrance, which took me about 25 minutes. I wouldn’t recommend doing it that way, since you have to go all the way down between the plateaux and then climb up the hill to the museum. The walk was pretty enough, but most people would find it better to take a bus from the center of the city.

The museum itself had some very nice exhibitions. This time, they had a few different collections from artist Wim Delvoye. I especially liked the one that was about re-creating daily life. He had taken normal, everyday objects and embellished them to the point where they looked like fine art or luxury items, like this cement mixer and road barrier that he made out of carved wood. They are such mundane objects, and had nothing at all to do with luxury, until he decided to make them special.

Another museum of interest is the Musée d’Histoire de la Ville de Luxembourg. It was closed for renovations this time, but normally you’d get an excellent overview of the history of Luxembourg City. You’d also be able to go up to the terrace for yet another gorgeous view of the valley. My trip was lovely, but it was such a bummer that so many things were closed!

Like I said, there’s no shortage of places to eat in the center. I had lunch at A La Soupe, which has a few different locations in Luxembourg. They serve healthy and hearty soups and sandwiches at a reasonable price. I had the bouneschlupp, one of the most traditionally Luxembourgish meals. It reminded me of Spanish lentejas but with green beans instead of lentils. I also had a hard boiled egg sandwich with mayonnaise, tomato, cucumber and lettuce. The food was delicious and filling. Their menus range in price from 7 to 10 euros.

They call themselves “a compromise between fast food and slow food,” combining the convenience and speed of fast food with the homemade quality and fresh, local, in-season produce of slow food. Their menu changes every week. They’ve invested in sustainable development by using only Fair Trade coffee, organic bread, and fully-recyclable containers for take-away. 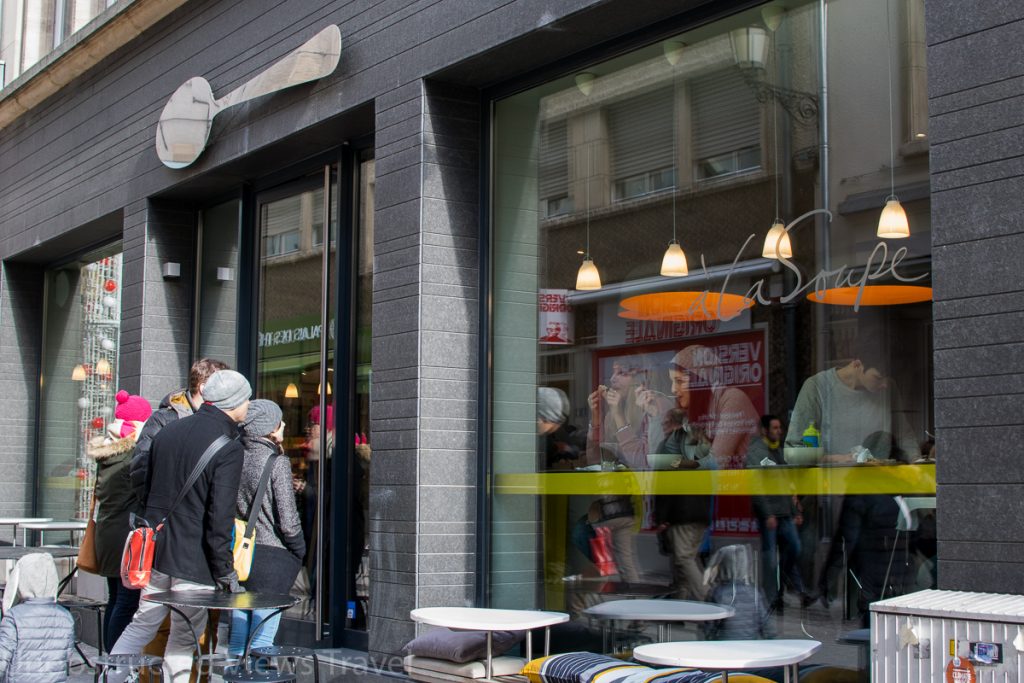 A La Soupe also collects spoons: if you bring an original spoon or even a normal spoon with a special story, you can get a bowl of the soup of the day for free, and they’ll ask you if they can keep your spoon to display (but you don’t have to give it away if you don’t want to).

The one downside to Luxembourg is that as far as sustainable shopping, there isn’t much. The only ethical fashion “store” is a pop-up shop in a van (AKABO) that started a few years ago. Sadly, like vans do, it travels, and our visits to Luxembourg didn’t overlap.

There is, however, a local goods souvenir shop in the center, just around the corner from the Grand Ducal palace, called the Luxembourg House. I stopped by to see what they had, and there were plenty of choices for souvenirs, though nothing that was practical enough for me to justify buying and bringing home. If you like souvenir T-shirts, though, they had locally made and printed ones made of 100% organic cotton. They also had some local foods (the non-perishable kind), silk scarves, tote bags and locally-made jewelry.

The biggest shopping street is La Grand-Rue, where I did some window shopping at all of the designer stores and chocolatiers. I caught the closing end of a local market in Square Guillaume II, and saw a Christmas market being set up in Place des Armes.

Next time, I think I’ll go in spring or summer, so I can visit the palace, the casemates, and the city’s history museum!