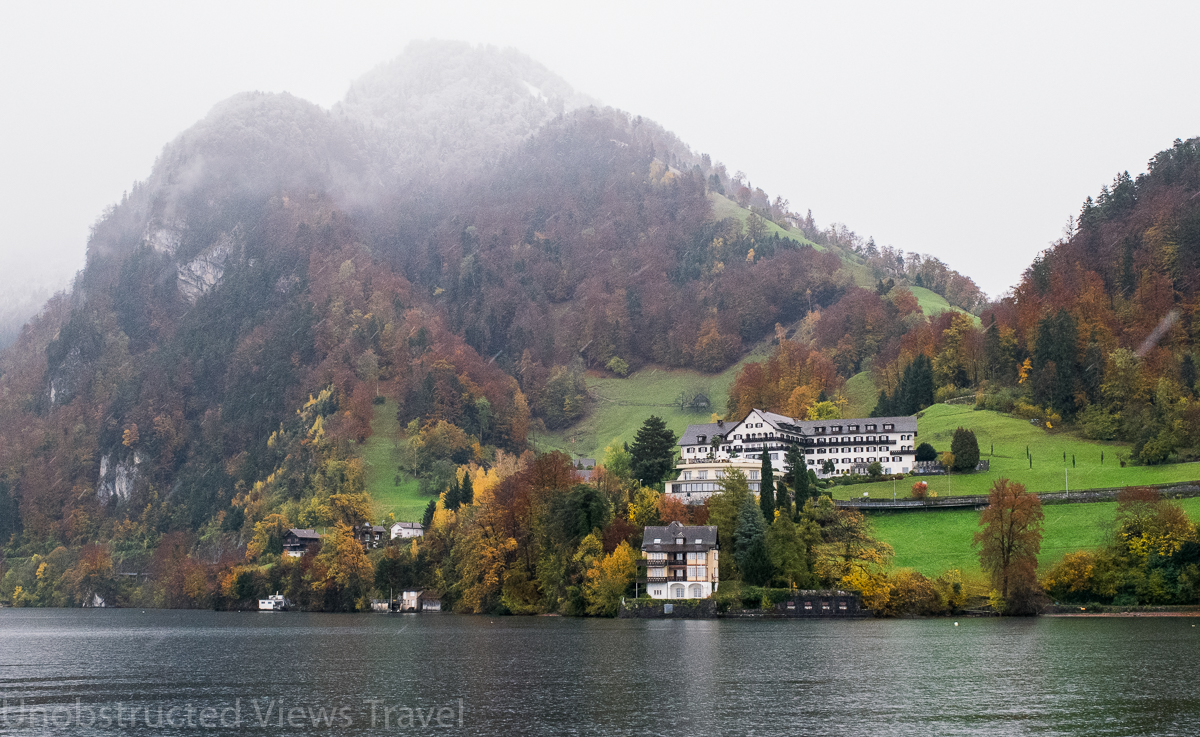 The highlight of our second day in Lucerne was by far the five hour lake cruise we went on.  I say “Lake Lucerne,” but if you look at the map below, you’ll see that it’s actually a couple of different lakes. The cruise we went on took us through Vierwaldstättersee and Urnersee.

As far as beautiful sights go, this might be my favorite place in the entire world. The water is clear and blue. The mountains, green at the bottom and filled with trees, are covered with snow at the top. The fall colors were stunning while we were there, during the first weekend in November. The houses and chapels that line the lake are colorful, and add to the scenery instead of taking away from it. Even the rain and the low clouds gave everything a fairy-tale sort of feel, though I’m sure it’s equally as beautiful in the sunlight. 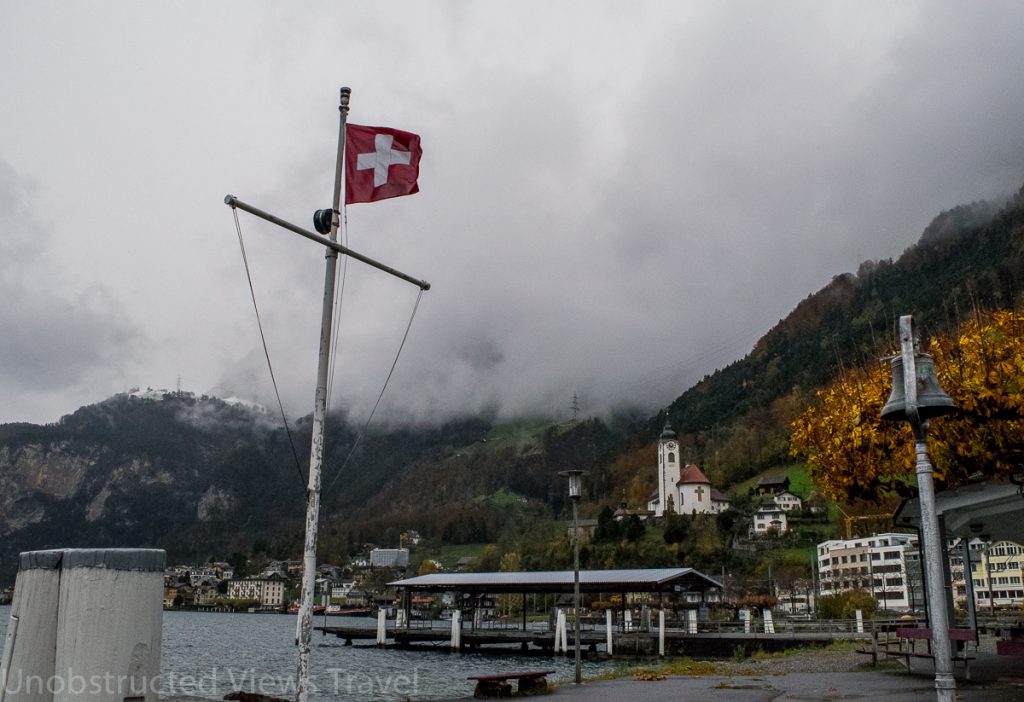 We went with the ferry company that serves all the towns around the valley. It’s called Vierwaldstättersee (same as the lake), also known as SGV group, and is also the only ferry company that is directly across from the train station when you arrive at Lucerne. It’s impossible to miss. They do a lot of different tours, ranging from one hour to five and a half hours. It’s not cheap (almost nothing in Switzerland is), but if you have a Eurail or Swiss Travel Pass you can do it for free. Interrail passes get you 50% off.

I say, if you’re going to do a free boat cruise, do the big one! So, we hopped on a round-trip from Lucerne to Flüelen and back. Normally, that cruise would cost 72 CHF (about 74 dollars) for second class.  We had our Eurail passes though, so we didn’t have to pay.  Here are the schedules and prices for the other Lake Lucerne cruises, under the “Seasonal Timetables” dropdown menu.

The boat was crowded, as was the rest of the public transportation in the area. There were a fair number of tourists doing what we were doing (taking pictures, taking selfies, going outside for the view and coming back inside for the warmth). There were also a lot of locals using the ferry for what it was intended (easy commute  from one town to another).

The weather that day was cold and rainy, so we didn’t spend the whole time out on the deck. Instead, we claimed a spot by the window at one of the lunch tables inside where it was warm. We were right next to the door, so whenever we saw a particularly photogenic scene, it was easy to slip outside and snap some photos before our fingers started turning white from the cold.

From inside the boat, it was fun to watch all the other passengers taking pictures. There was one man who, by the end of the trip, must have had at least three hours of video footage of just his face. We watched him go outside again and again to point a camcorder (yes, an actual camcorder from the 2000s) at himself for 45 minutes at a time. There was another couple who tried to do the titanic pose (of course) and then tried to do some one-foot acrobatic balancing poses while standing on top of a slippery plastic bench in the front of the moving boat. I was sure they were going to fall! 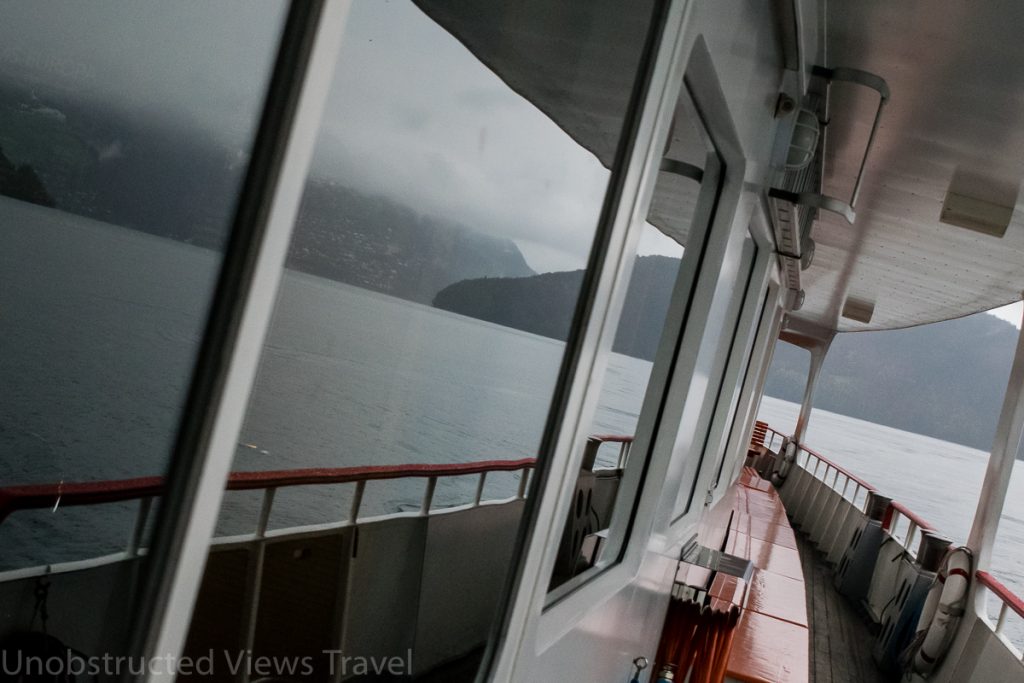 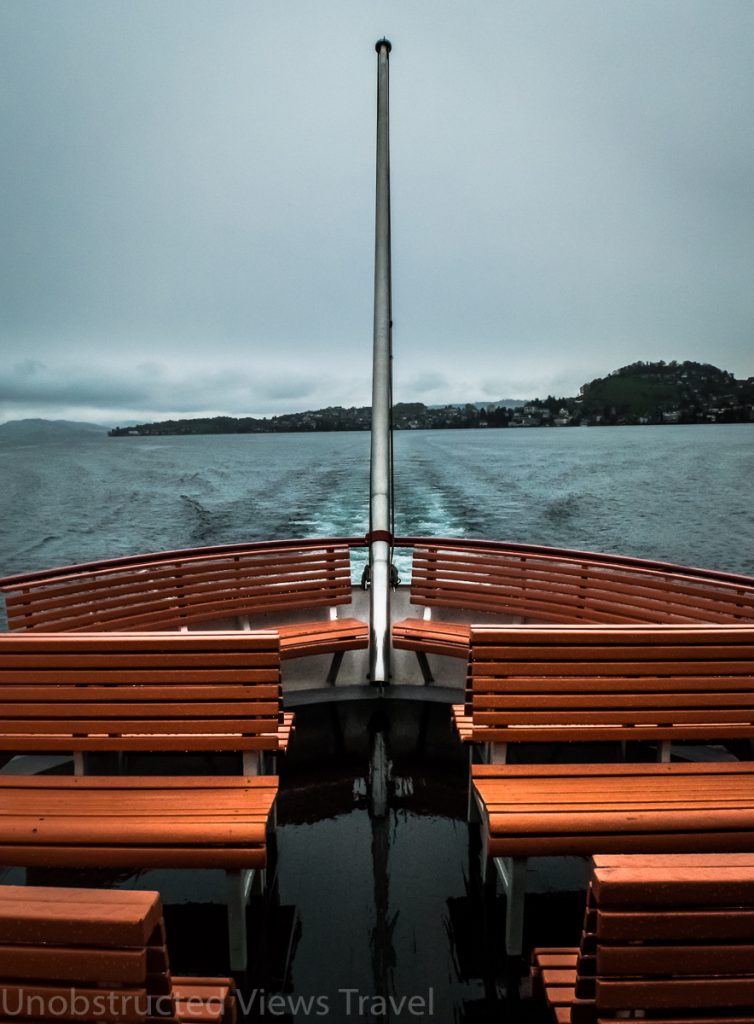 There is food for sale on the boat as well, but the choices vary depending on the season, the day, and even the time of day you take the cruise.  Check their website for more information about lunch or dinner cruises.

Scenic highlights of the trip:

Passing by the Schiller stone:

Admiring the quaint little houses and chapels along the shore: 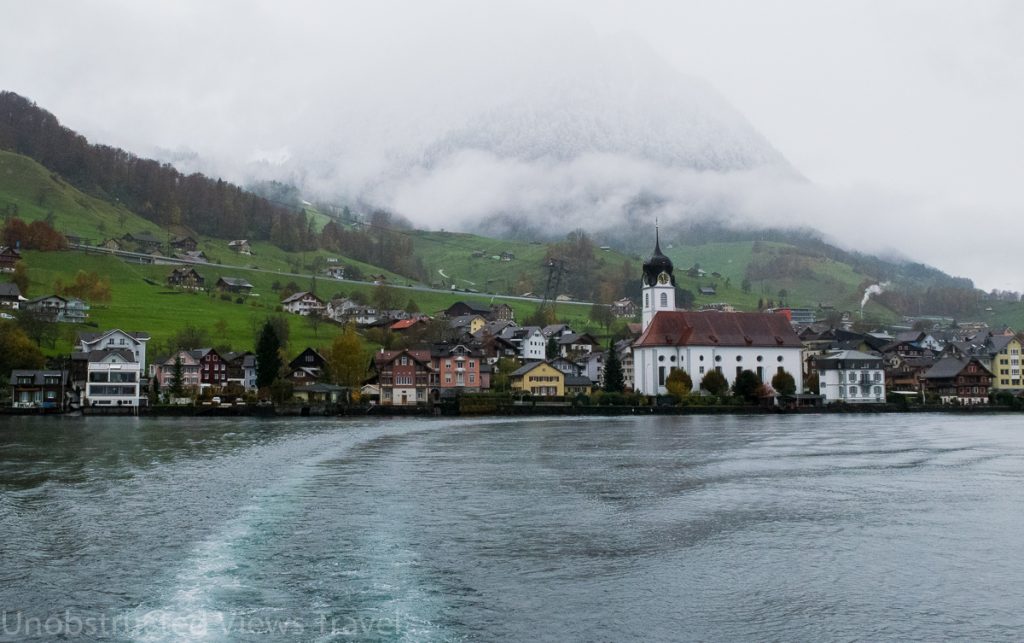 Map of the lake

2 thoughts on “Cruise on Lake Lucerne”