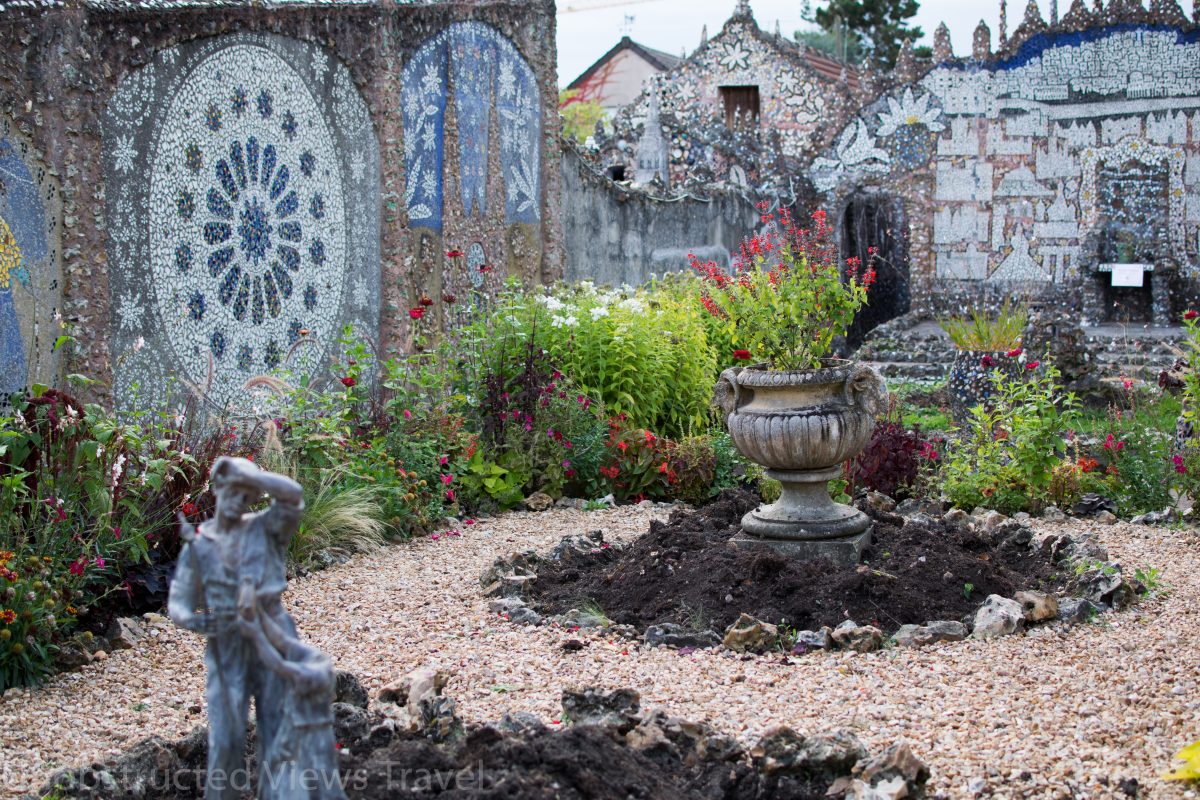 Chartres, a tiny town not too far from Paris, is famous for its cathedral, which is one of the finest examples of French Gothic architecture. But Chartres has a well-kept local secret: the Maison Picassiette.

If you didn’t go looking for it, you’d never find it. It’s a small house (maison means house in French) up on a hill behind the St. Chéron cemetery. It was built in the 1900s over a period of thirty-five years. What’s special about the Maison Picassiette, though, is that it’s a stunning example of Art Brut or Art Naïve, which means that it was done by an untrained artist, someone who didn’t necessarily have contact with the  mainstream art world.

I think Art Brut is especially interesting because it’s kind of an untainted creativity. Seeing other artists’ work can give you a lot of inspiration in a lot of really good ways, but there does come a point where all that outside influence starts to affect what you feel free enough to do. Some artists break that barrier anyway (think: the first impressionists, for example), but many don’t. Untrained artists like Raymond Isidore (who built the Maison Picassiette) are free to do literally anything they can think of in their work, because no one has any expectations or gives them any constraints. That also usually means that these “outsider” artists aren’t recognized until after their death.

I experienced some of that with my own photography. When I look back at some of the first things I shot, my photos were different, more abstract, more on the side of what people might call “fine-art photography,” but I didn’t have the technical skill of a “real” photographer. The more I learn that technical skill and the better I understand principles of composition and lighting and all that, the more my photographs begin to look generally pretty. True, people like them more, because people are naturally attracted to photos that follow the rule of thirds, or have warm colors, or are perfectly focused. They are better photographs. I can’t argue with that. But I do feel like the more I focus on composition, the harder it is to create things that are innovative and fresh.

The artist and his house

Raymond Isidore, who worked in the nearby cemetery, bought a small piece of land and built the house himself out of cement. Then he decided to decorate it – and decorate he did, every square inch of it. He used broken ceramic that he collected from around town, and he had an eye for the most colorful and extravagant pieces. He cemented them into the walls and furniture of his home, and built statues and decorations for the garden and for the rooms inside.

Inside the kitchen and bedroom, parts of the walls are painted frescoes instead of mosaic, but the colors and style blend right in.

I had to walk through the house three times to feel like I had really seen it, because there was so much detail. Every single piece of ceramic was meticulously placed. Every mosaic was planned and thought out down to the smallest details. Nothing was random, and nothing was forgotten. The walkways, the roof, even the windows were decorated.

There were mosaic representations of dozens of different cathedrals from around France, and images of other monuments such as Mont Saint-Michel and a statue replica of the Eiffel Tower.

Of course, once you start covering your house in colorful ceramic mosaics, the neighbors are going to start to notice you. Isidore’s neighbors started calling him Picassiette, a shortened form of Picasso des assiettes, which translates to “Picasso of the plates.”

What impressed me most was thinking about how much time it would have taken him to do this. Thirty-five years sounds like a lot already, but when I try to imagine him doing it all by himself, mostly working during the night (because he still had a day job and a family to take care of) taking the time to collect the perfect mosaic pieces and organize them and plan where each was going to go, it’s absolutely incredible.

He started with the interior, and when he ran out of space, continued the project outside in the garden and courtyard.

I think it makes it perfectly clear that you don’t have to be a trained artist to create something beautiful or meaningful.  You just need a little talent and a lot of dedication. I know plenty of people who might want to start a project like this, but I’m not sure I know any who would be that committed to it for that much of their life. Raymond Isidore kept adding to the decorations and to the house until he died in 1964. I wonder if he ever considered it finished.

It’s a bit of a walk to get there on foot from the city center (about 25 minutes), but it’s worth it. You could also take the bus. I might have even enjoyed this more than the cathedral. The St. Chéron cemetery is right on the way and gives a lovely view of the city from above since it’s on a hill. I’d definitely recommend stopping there either on the way up or the way down. The house is usually open from 10 to 6 (closed on Tuesdays, 2-6 on Sundays) and tickets are inexpensive. Adults are $5.60, students are $2.80, and under 18 is free. The price is well worth it.