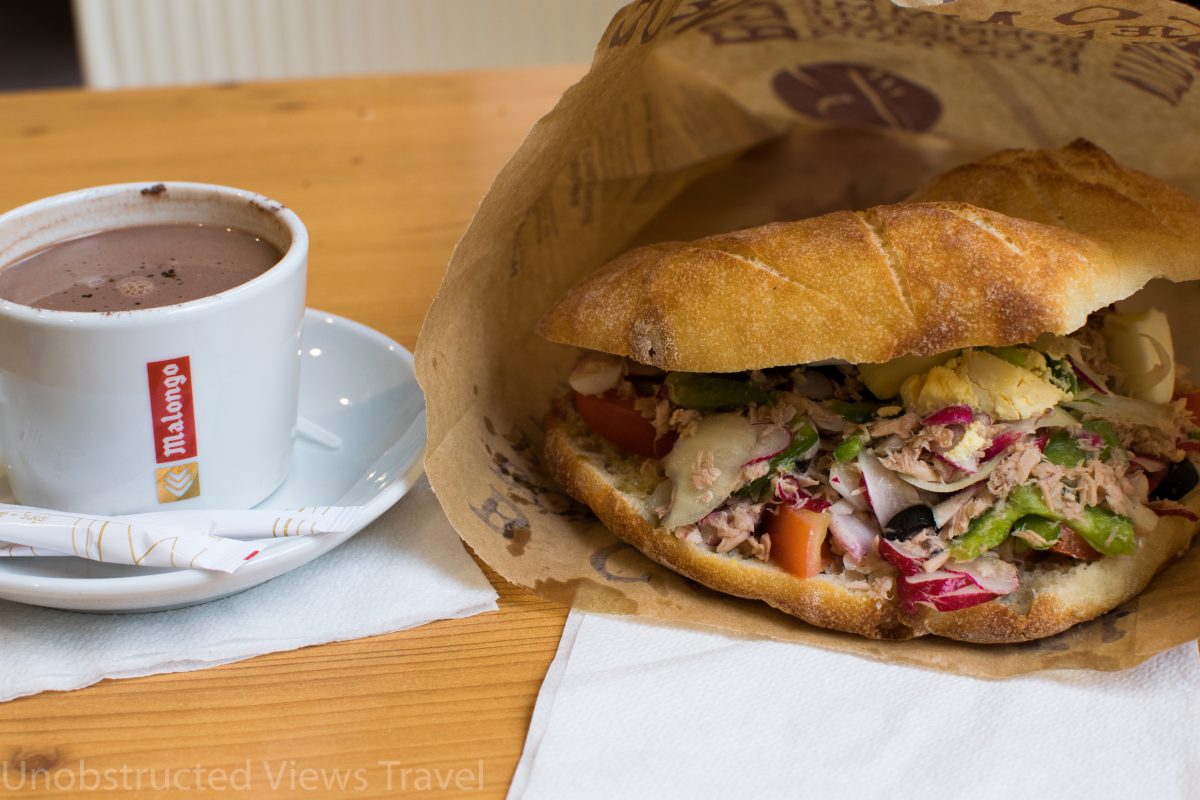 While this guide is specifically geared toward travelers in Nice and the south of France, much of it is useful in any location on the Mediterranean coast. The pan bagnat may not be the most popular food in Barcelona, but the sustainable species of tuna remain the same.

First of all, I’m going to give you a really good tip. Two tips, actually: Seafood Watch and Good Fish Guide. Both are apps that make finding sustainable seafood incredibly easy.  They are similar, so try them both and see which one you like best, or use them together like I do. They both allow you to look up seafood by species to see how each is ranked for sustainability. The apps take into account population size, fishing methods, and ripple effects from the capture of each type of fish.

In this guide I’m just going to cover the most popular regional seafood dishes and give some advice about how to make sure the ones you buy are sustainable. Then, if you want more detailed information, I highly recommend downloading one of the two applications.

If you’re headed south, you’ll definitely want to try some of the most popular local foods. Here’s a short list of traditional meals, including dishes from several of the coastal cities:

Pan bagnat: (Nice) Basically a salade niçoise in a sandwich made with a large round loaf of bread. Pictured above, with Italian hot chocolate.

Moules à la crème, or moules marinières: (technically from Normandy, but you can find them almost everywhere in the south) Mussels cooked in either a cream (à la crème) or wine (à la marinière) sauce and usually served with french fries (frites).

Anchoïade: (Provence) A sauce made from anchovies, capers, olive oil and garlic. Served with vegetables for dipping.

Ratatouille: (Provence) Not seafood, but a dish of cooked vegetables and herbs.

Yeah, that list has a lot of seafood on it! It’s all going to be delicious, given the proximity to the coast, so let’s get right down to how to choose the most sustainable dishes.

We’ll start with the easier ones before we tackle bouillabaisse. I mean, you saw that list of ingredients, right? Holy mackerel! I mean, holy scorpionfish! Or something like that.

A main component in many Mediterranean dishes. If you head farther south, to Spain, you’ll find it in everything from salads to pasta sauce.

Summary: Look for imported Pacific Albacore, but don’t eat too much of it.

Although a very popular and integral part of Mediterranean cuisine, in general anchovies are not sustainable seafood. This is because there are serious concerns about fishing methods, the status of anchovy populations, and effect of fishing on the food web and ecosystem.

Best choice: The only anchovies that are considered sufficiently sustainable are those caught in the Adriatic Sea.

Summary: Best to avoid the anchovies.

While the mussel dishes mentioned above originated in Normandy, moules are a seafood staple throughout the regions surrounding the Mediterranean. They are some of the most sustainable seafood you can get!

Species to avoid: none.

Summary: Farmed or wild, eat away! Mussels are delicious and very sustainable.

Sustainability information for scorpionfish, specifically scorpaena scrofa, isn’t as well understood as for other species of fish. However, because it is a deep-water fish, know that any fishing method will likely interfere with the delicate seafloor ecosystem. In addition, there is concern about the small size of scorpionfish populations. This fish is one that should be avoided, not least because of how much we don’t yet understand.

Summary: This is the main ingredient in bouillabaisse, so better skip that dish for now. Try some of the other regional dishes instead!

Yikes. This is one of the most unsustainable things you can eat. Conger Eel got the lowest possible sustainability score in Good Fish Guide for all capture methods, largely because they have low resilience and only spawn once before they die.

Gurnard isn’t as commercialized as other fish, and eating it may actually help reduce waste from discarded fish due to low demand. Avoid immature fish (less than 24cm) and fresh fish during summer months, because that means it was caught during its spawning season.

Monkfish is moderately sustainable, depending on where it was caught (the Iberian Sea is best). There is plenty of concern about bycatch, so make sure you only eat this one in moderation.

John Dory is usually caught as bycatch, so in that sense eating it is good. On the other hand, since it’s not a regulated or protected species, sometimes immature fish are caught and sold. It’s not regarded as highly sustainable in the long run.

Summary: These are generally fine in moderation.

Sea urchin sustainability information for the Mediterranean Sea is hard to come by. If you happen to see some that was imported from Canada, by all means, eat it. Unfortunately, that’s not likely to happen in the south of France, so you should probably avoid this one just to be sure.

Weever is a poisonous fish that is not well-researched as far as sustainability, though there is a lot of information about weever stings and people who have inadvertently stepped on them.

Summary: due to lack of information about sustainability, and due to potential poisonous stings, avoid both eating and stepping on.