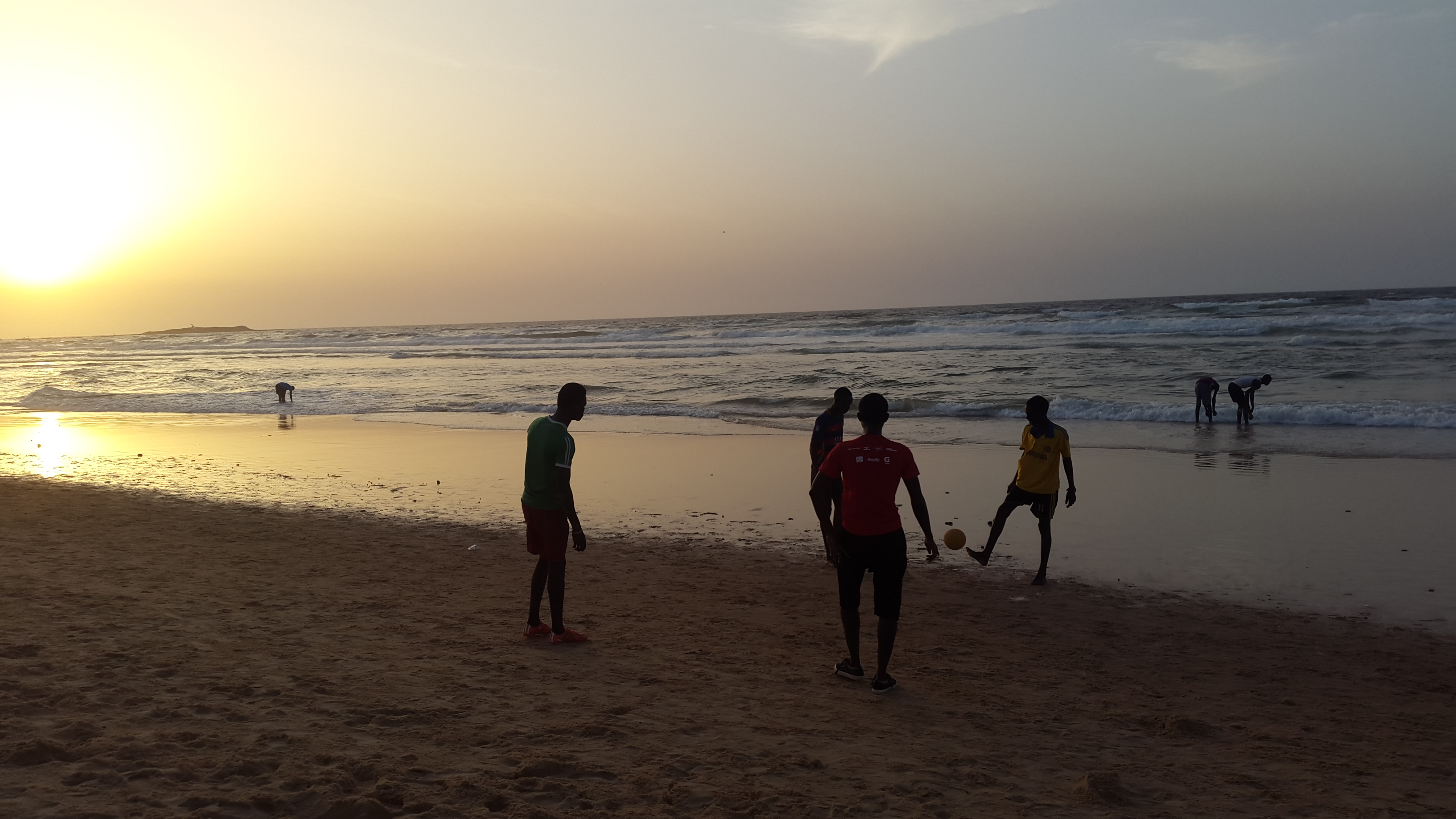 Since I’m living with a host family here, I have the great opportunity to learn what family life is like in Senegal. I’m in the home of a fairly average Senegalese family, in an average neighborhood. They aren’t rich, but aren’t comparatively poor, either. Normally, it’s just the mother (who we call Maman Nabou), and her daughter Seynabou, but this weekend was a holiday so a lot of the extended family came to visit and there are at least 15 people staying here right now, including one other girl from America and a girl from England.

The Senegalese are super warm and welcoming. It reminds me a lot of the hospitality in Spanish culture. People are very open and friendly, and willing to invite us into their homes and lives. When I first sat down with Maman Nabou to get to know her and give her some gifts I’d brought, she said, “ici, vous êtes mes filles. Vous êtes comme des membres de la famille, comme si vous étiez mes propres filles,” which translates roughly to, “I consider you members of the family as if you were my own children.”

As members of the family, we (myself and Stephanie, the other student staying with the same family) got nicknames (sort of). They call her “Fanny” and me “Amina” (pronounced Ah-mee-NAH). They think my name is Aminata, which is a typical Senegalese name. Sometimes they call me “amie” which means “friend” in French and is somewhat closer to my English name. I like that they call me Amina, though. It makes me feel more connected to them.

The most important thing to know about Senegalese families is that they share everything. People don’t really have private stuff here.  They gave Stephanie and me our own room with a lock because that’s part of the deal with the research center we’re with, but the rest of the family is all in each others’ lives all the time. The best example of this sharing mentality is at dinner. We all eat sitting on the floor or on low couches from one communal dish, and everyone just digs in. Sometimes they have forks or spoons, but sometimes you just eat with your hands. Your right hand, that is. The left hand is associated with “dirty” tasks like cleaning yourself and shouldn’t be going in everyone else’s food. I kind of like the way everyone shares one plate. It means fewer dishes, and less going to waste because everyone only eats what he or she wants. I’m not too much of a germophobe though, but I suppose the idea of double dipping in a community dish might make some people uncomfortable. It’s all just part of the Senegalese culture!

Speaking of food, so far I’ve liked everything I’ve tried. The Senegalese really like spicy food, and they love sugar. They put sugar in everything, especially their tea. They put a LOT of sugar in their tea. They also love onions, a lot. We had chicken and rice and an onion sauce our first night (poulet yassa), and a cold, sweet peanut soup with raisins for supper. This evening we had pasta and some kind of beef sauce. For breakfast, we had pain au chocolat and a tea made from mint and hibiscus. I only put one sugar in – which is a lot for me because I don’t usually put any sugar in – but I told Maman Nabou that I had put in three sugar cubes like she told me to.

Laundry is interesting, too. Almost every relatively well-off family has someone hired to do the laundry, or if not, a member of the family does it.  Clothing is hand-washed here, and hung out to dry. However, the person doing the laundry doesn’t wash anyone’s underclothes. Underwear is considered intimate and super personal here, to the extent that no one should ever see yours, and everyone washes his or her own underwear either in the shower or separately and then hangs it up to dry in a semi-private place. So yes, I hand washed my underwear in the shower this morning.

As for the house itself, I still don’t quite understand how bathrooms work here. In our house they furnished one upstairs bathroom in European style since they have frequent foreign guests, but the family bathroom is totally different. For starters, there’s no toilet. And no shower head. And there are never any mirrors. There is just a tile floor with a hole in it that I think is both the toilet and the drain for the shower, but I’m not sure. And, there are several buckets that are almost always filled with water. I’m pretty sure one of them is used for washing/showering and I know at least one of the others, the one with a small pitcher, is the replacement for toilet paper, but again, I’m not entirely sure how that works. I mean, I have an idea, but I’m kind of hoping there’s something I missed. Anyway, until I figure out what exactly that hole is for, and most likely even after that, I’ll be using the upstairs European bathroom.

One last thing is the language! Though French is the language on most of the signs and notices and documents (and even on TV), most people speak Wolof when they’re at home or with people they know. I’ve learned a few key phrases, but unless the family members are specifically talking to me (meaning they use French), I can’t understand them. Sometimes they’ll mix French words into the Wolof, which is fun, but confusing.

I’ve only been here for three days, so I’m sure there is much more that I’ll learn about family life here, but these were the things that most impressed me from the start. I think I’m going to really like it here. It’s different, but I like it. I appreciate the openness of the culture and the warmth of the people I’ve met so far.

One thought on “Family life in Senegal”