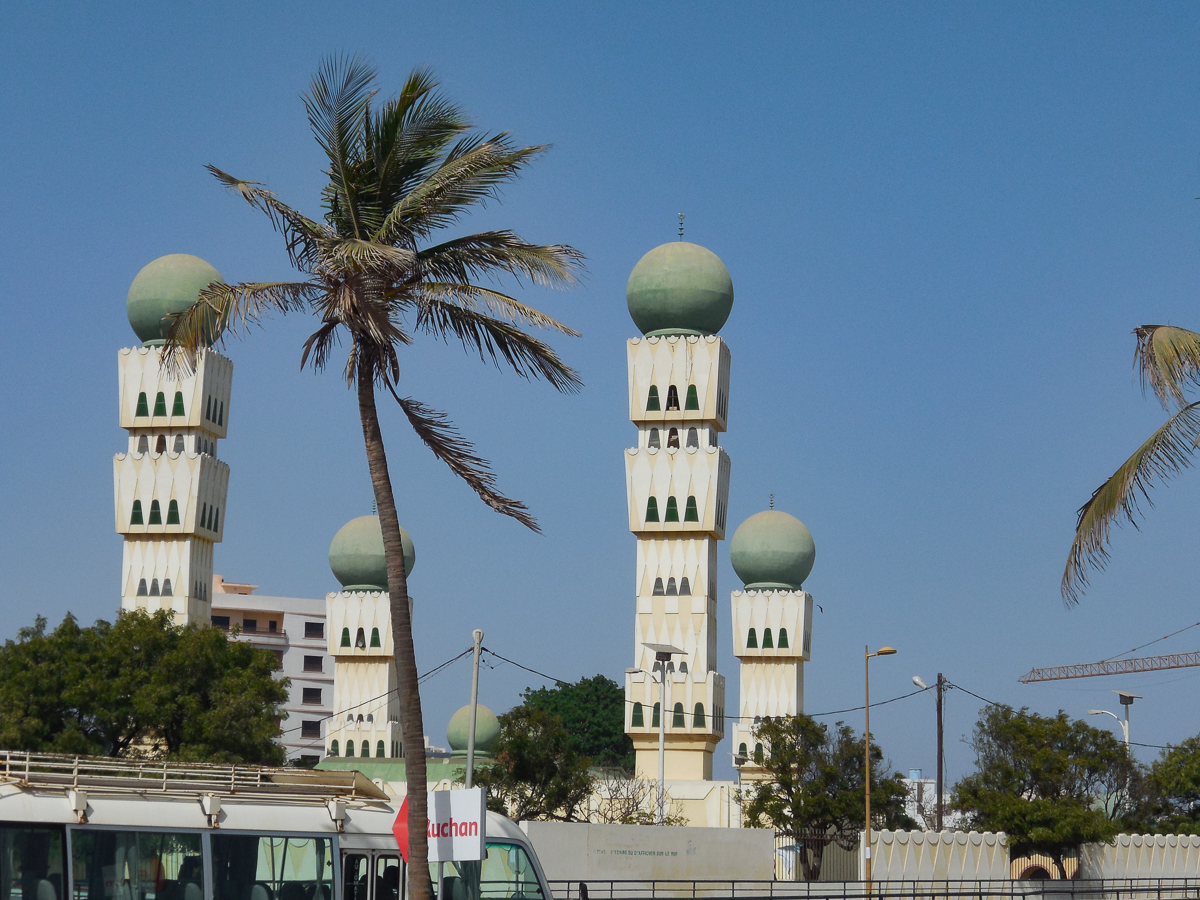 This post is slightly disjointed, so sorry about that! I’m just trying to get a last few thoughts written down before I leave for Paris and get too absorbed with visiting friends and writing my research paper that I forget to do it. These experiences are all disconnected, so think of this as a short series of mini journal entries.

One day, I accidentally washed my underwear in one of the serving pots for food. Oops! I had asked where to find a bucket to do my laundry and they said “upstairs,” so I went upstairs and found a bucket. Apparently, by “upstairs” they meant “the roof,” where the actual laundry buckets are. I found out when the maid scolded me. At least I know for next time! And at least I still had clean underwear.

Also, I learned how to use the pit toilet. The hall door was locked one night and I couldn’t get to the European bathroom, and necessity is more important than comfort. That’s all I’m going to say about that, except that it wasn’t as terrible or difficult as I expected.

A friend and I went to a dance with the daughter of our host mom, Seynabou. She’s our age and is about to graduate from college, so her classmates had a party. We went and tried to dance like everyone else. It was a little embarrassing, since 1) I have no idea how to dance, and 2) it was a one-by-one thing where you run into the middle of the circle and dance for everyone all by yourself. But, everyone was so nice, complimenting us on our attempts and inviting us to other dances and activities that weekend. And, of course, Seynabou has her heart set on pairing each of us up with one of her guy friends, so we can “get married and come live near her.” I said, “we’ll see.” Haha. Her friends are super nice, but I think I’d rather avoid a long distance, cross-ocean relationship right now.

Seynabou braided my hair. It was actually very convenient. Showering with a bucket is so much easier when you don’t have to wash your hair! Okay, in the USA it would be considered cultural appropriation, but I’m in Senegal, and I think embracing the culture and living it is a huge part of understanding African society. Hair braiding and boubous and pit toilets are all part of the experience!

We met with several professors from the university here, and had a meal with some of their students. I’m learning so much about the culture, about the role of women in the society here, and especially about the practice of polygamy. It’s still very much a part of their culture, and it’s been so interesting to hear so many different points of view, from men and women across multiple generations. 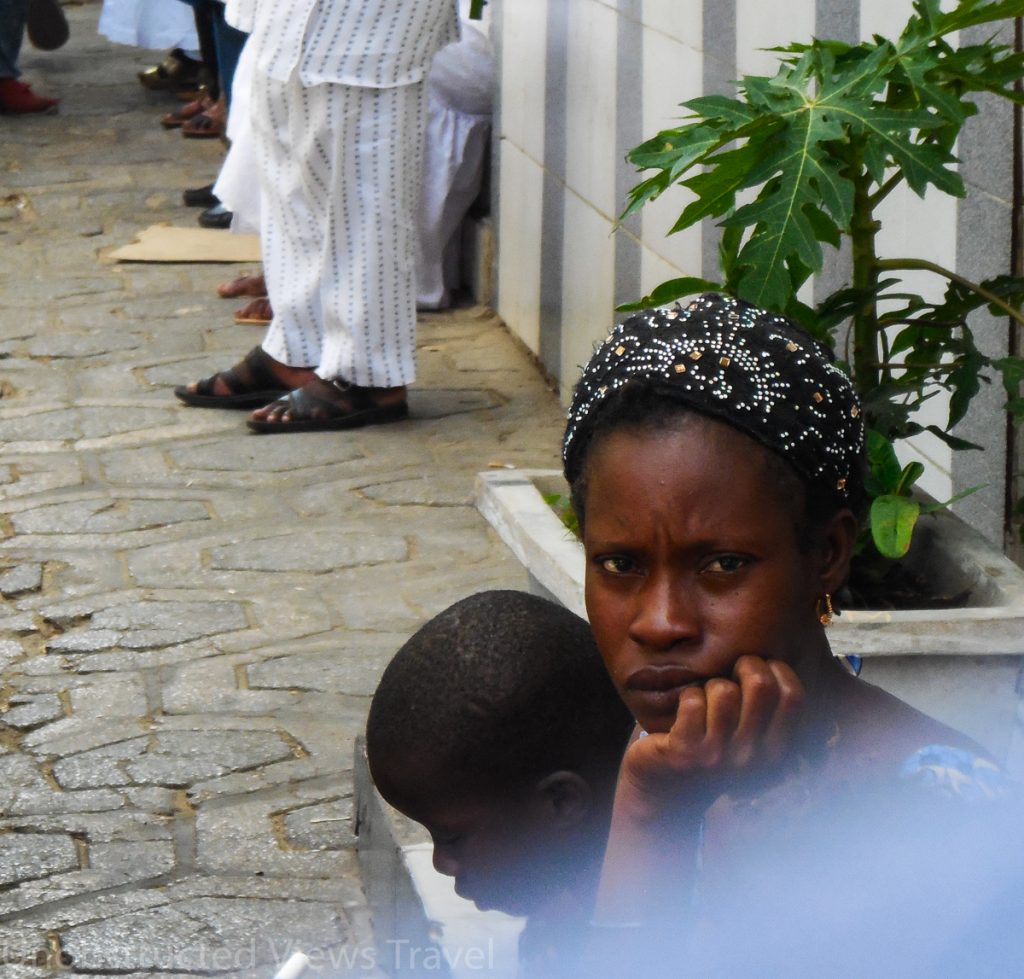 We also met the author Cheikh Hamidou Kane. Most Americans will have no idea who that is, but in Africa he’s a legend. Every time anyone saw us reading his book L’aventure ambiguë, they would freak out and say “that’s such a good book! Cheikh Kane is a inspiration/my role model/genius/etc.” Turns out my professor is very good friends with him, so even though he’s very very old now, he came to visit us and answer some of our questions about his book. It was especially interesting because L’aventure ambiguë is a semi-autobiographical book, in which he talks about the choice the Senegalese had to make when the colonizers came, whether or not to send their children to the European schools. It’s extremely profound, discussing themes of reason vs. faith, indecision, one’s connection with God and with one’s past, and the feeling of being torn between two opposing worlds.

Adventures in the city

We went downtown on Friday afternoon to see the grand prayer at the mosque there. The streets were so crowded, the closest we could get was two blocks away from the mosque. The streets had been transformed into an extension of the mosque, with hundreds and hundreds of people laying out mats and rugs in the middle of the street itself to pray. We stood behind them and watched. It gave me chills to see the unity and faith of the people there. All across the city, thousands of men and women were praying at the same time to the same God. Of course, as soon as the prayer ended, the street went back to its previous state of commerce and chaos, but for a moment everything was quiet and still.

We visited a foster home (L’Empire des Enfants) for children who were homeless, kidnapped, or being exploited by false écoles coraniques. Sometimes, men will go to the small villages in Senegal or Gambia claiming to be the director of a Quran school and will offer to bring the children to Dakar for school in exchange for a small fee. The parents, often poorly educated themselves, accept. The children never go to a Quran school, but are held captive, abused, and forced to go to the streets to beg. If they don’t bring back a certain quantity of money at the end of each day, their captor beats them. The association we visited is one of many that works to find these children, find their parents, and give them a place to live and eat and play and attend school until they can be sent to their rightful homes. They have a lot of success. We were invited to spend the afternoon with them, playing basketball, playing other games, dancing and singing. They really wanted to take selfies with us: 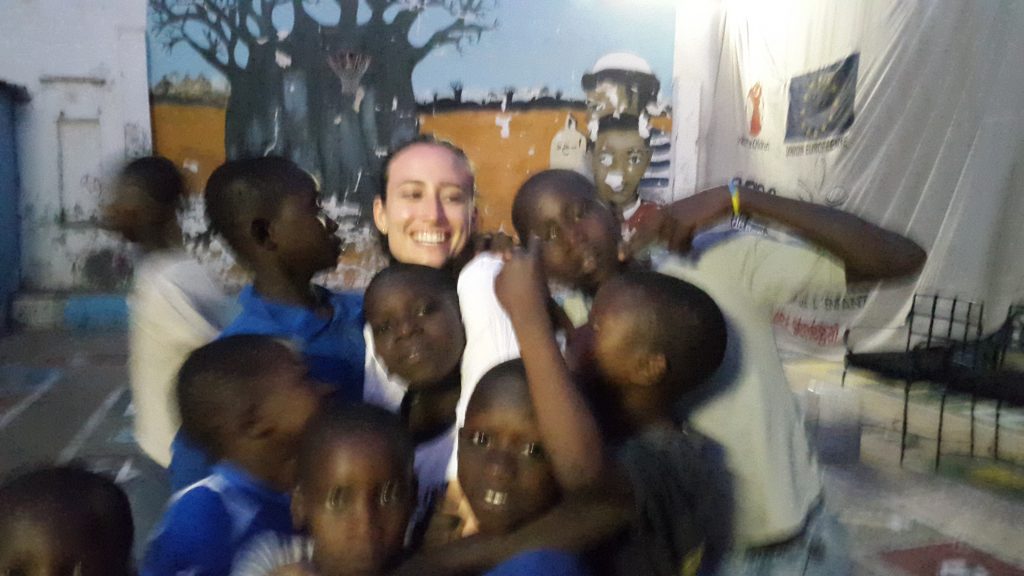 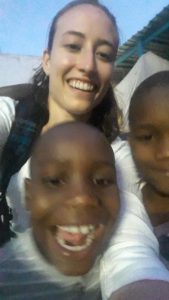