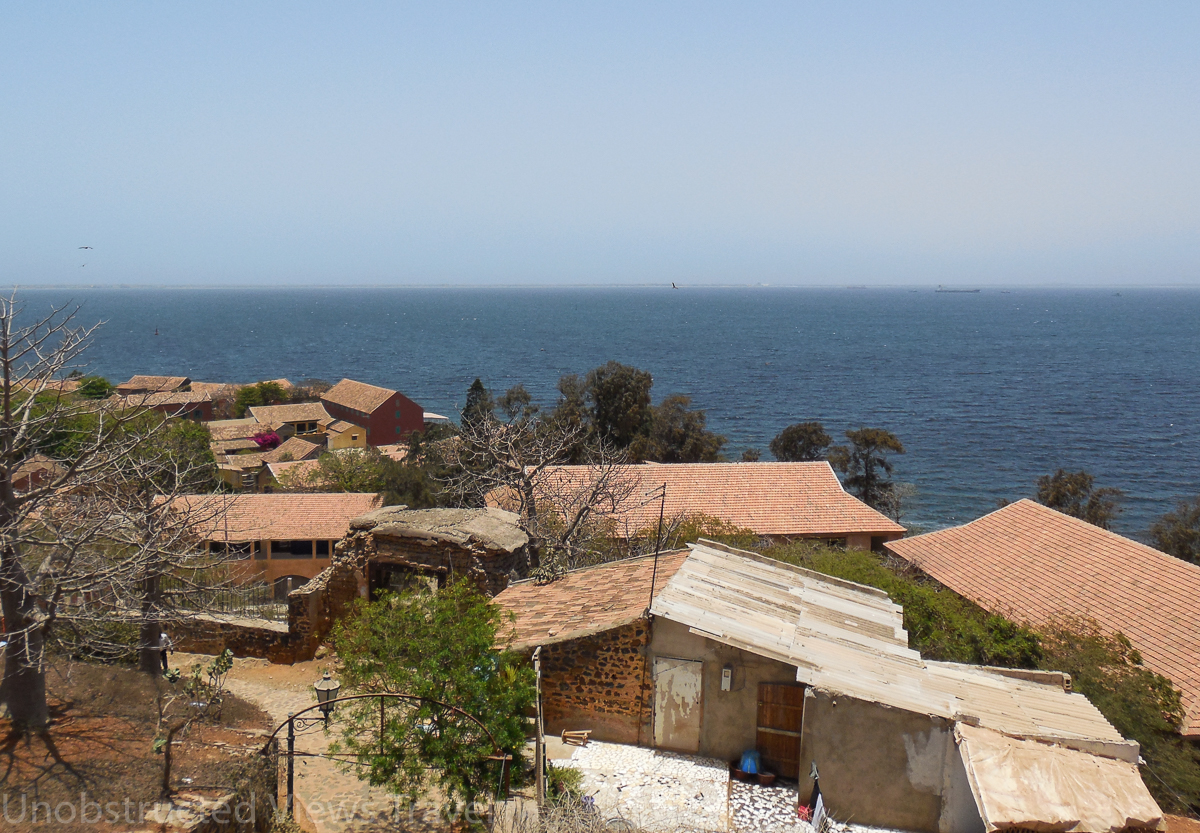 L’Ile de Gorée is one of the most beautiful places in Senegal. The colorful houses and quaint narrow streets are unbelievably charming. The artisan’s markets are beautiful to browse, and the variety of the handmade art is surprising, given how small the island is. It’s more diverse than most markets in Dakar, at least as far as art and jewelry. If that’s not enough to convince you to take the boat over from the mainland (roundtrip is 5000 CFA, or about 8 dollars), just think of the stretches of beach where you can swim, rest in the sun, play with the elementary school kids on the weekend, or grab a bite to eat at one of the nearby restaurants.

In spite of its beauty, Gorée has a dark history. It played a central role in the slave trade out of Africa. At least 100 million slaves passed through Gorée, through the Maison des Esclaves, where you can take a guided tour today.

Slaves were brought to the coast from deep within the continent, sometimes by the Europeans themselves, but often by Arab intermediaries. The farther the slaves came from, the more valuable they were, because it would be harder for them to escape and make it back, and because the slave traders wanted to isolate them in order to sever community and family ties. In order to make someone a slave, the slave traders treated them as objects instead of as human beings, and taking away family and social ties was part of that depersonalization.

In 1815, the slave trade was abolished, and in 1848, the French colonies abolished slavery itself, but before that point, millions of Africans, including Senegalese, died. Only 25% of the slaves captured actually made it to their destination alive, mostly because the slave traders fed them poorly and kept them in horrible conditions to weed out the weaker people and make sure that they were only sending the strongest. It wasn’t by accident that only 50% of the slaves imprisoned at Gorée survived their stay.

The history is sad, but the Senegalese recognize that it’s important to remember. We learn about slavery in the United States at school, but I highly recommend a trip to the Maison des Esclaves, to better understand what happened on the other side of the Atlantic.

As I said, the markets offer lots of variety of traditional jewelry, clothing and art. However, unless you’re looking for art or necklaces specifically (Gorée is well-known for its colorful necklaces), I’d avoid stopping to look in the boutiques. It’s better just to keep walking unless you actually plan to buy something. Why? Because the merchants are surprisingly aggressive!

In Dakar, they will try to sell you things, but if you say no and don’t hesitate, they’ll leave you alone. On Gorée, they start before you even get off the boat. They will tell you about their boutique and say, “will you visit my store?” Being polite, you’ll say “sure, why not,” without the intention to actually go find it. But now you’ve given your word, and the merchant will hold you to it. If you pass by the market without going in their boutique and they see you, they will come tell you that you promised, that you gave your word, and that you have to go in their store or you’re a liar and a cheat. So you go in. And they do not let you leave until you’ve bought something. One of my friends slowed down as she passed a boutique, and the merchant came out and grabbed her by the wrist and refused to let her go, even when she said she didn’t want to buy anything. The merchant woman, holding her by the wrist, pulled her into the boutique where she was stuck for half an hour until another one of our friends came and told the merchant that she had to take her friend and leave ASAP. So, yes, the markets are beautiful and interesting, but don’t show any interest and don’t make any promises to anyone, unless you are absolutely sure you’re going to buy something from them. And even then, don’t forget to negotiate! You should aim for about half the price they quote you, though sometimes you can bring it down to 25%.

I’m obsessed with these windows. 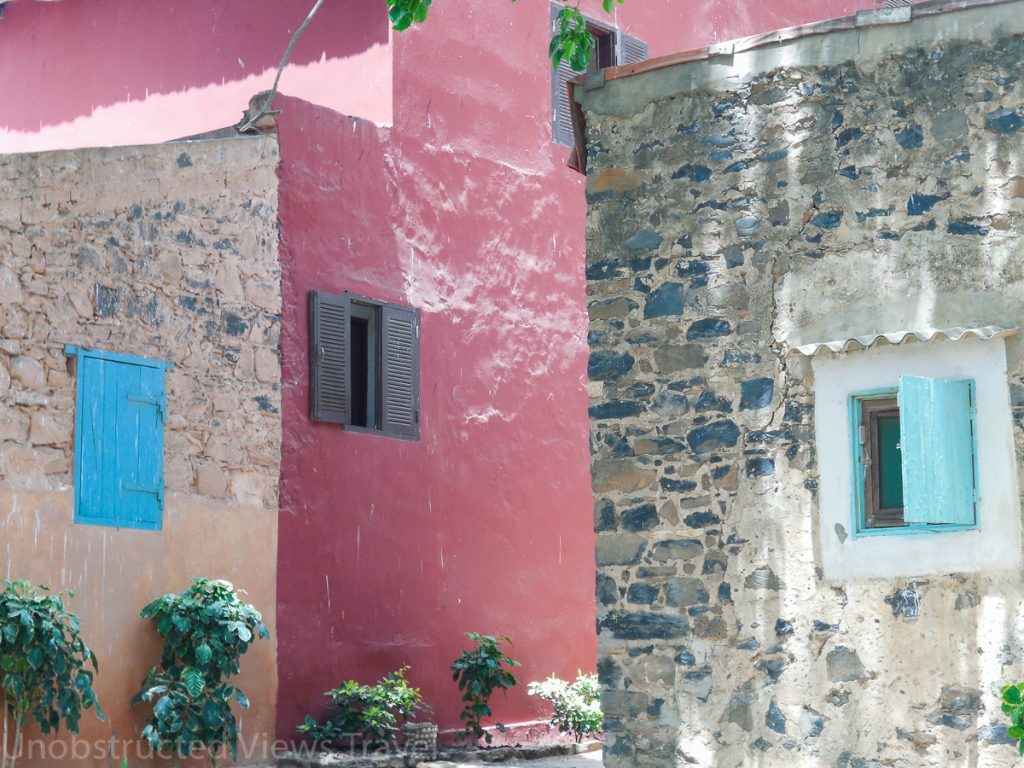 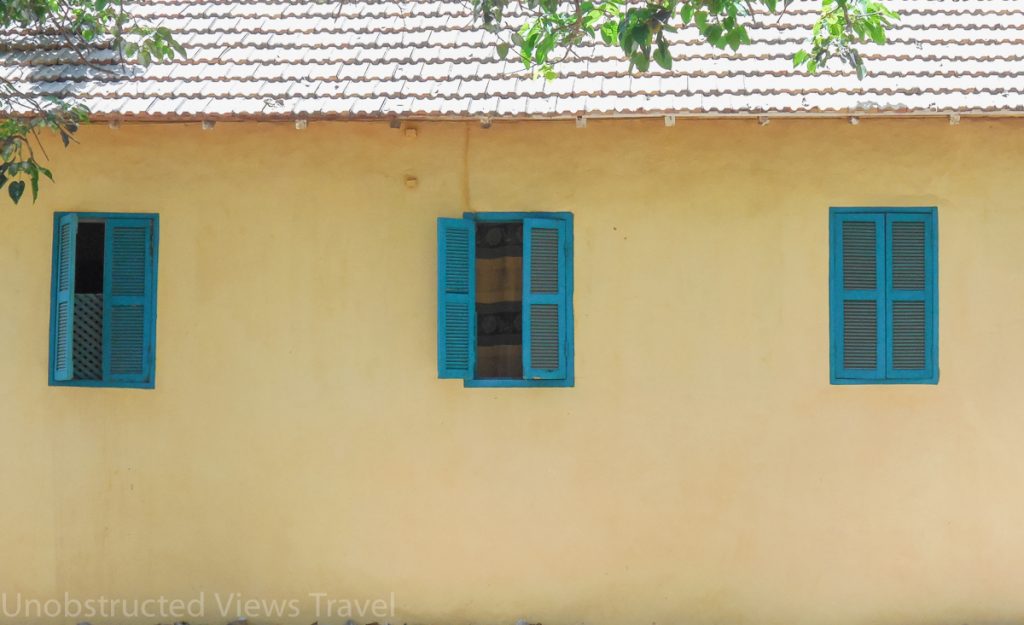 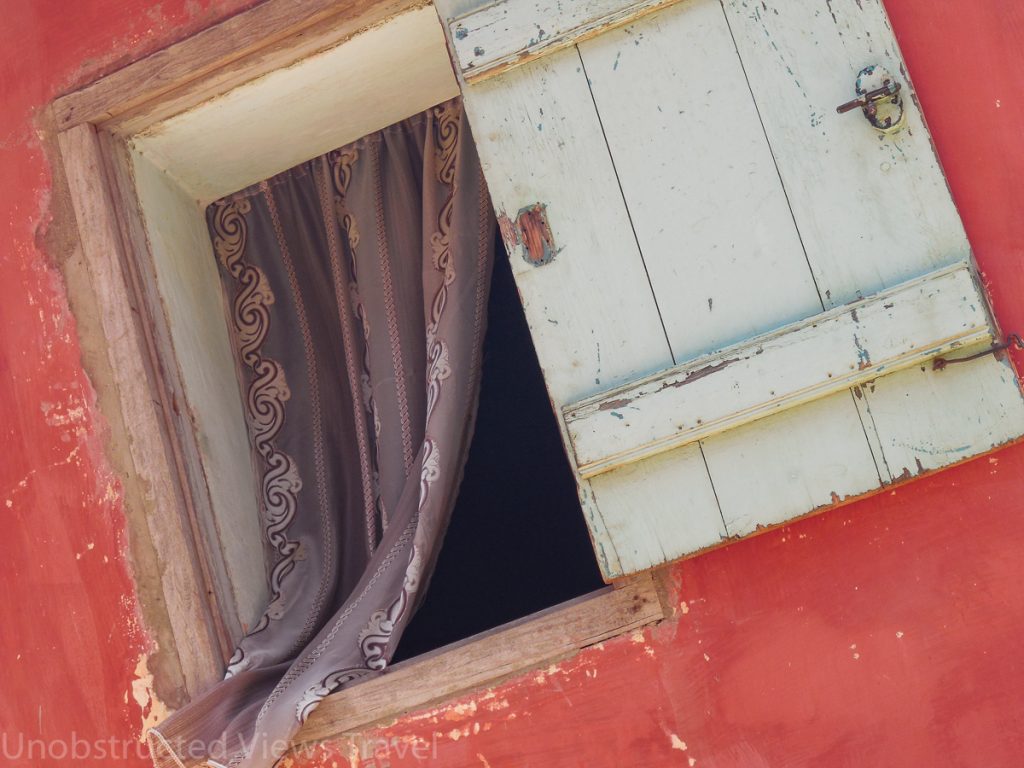 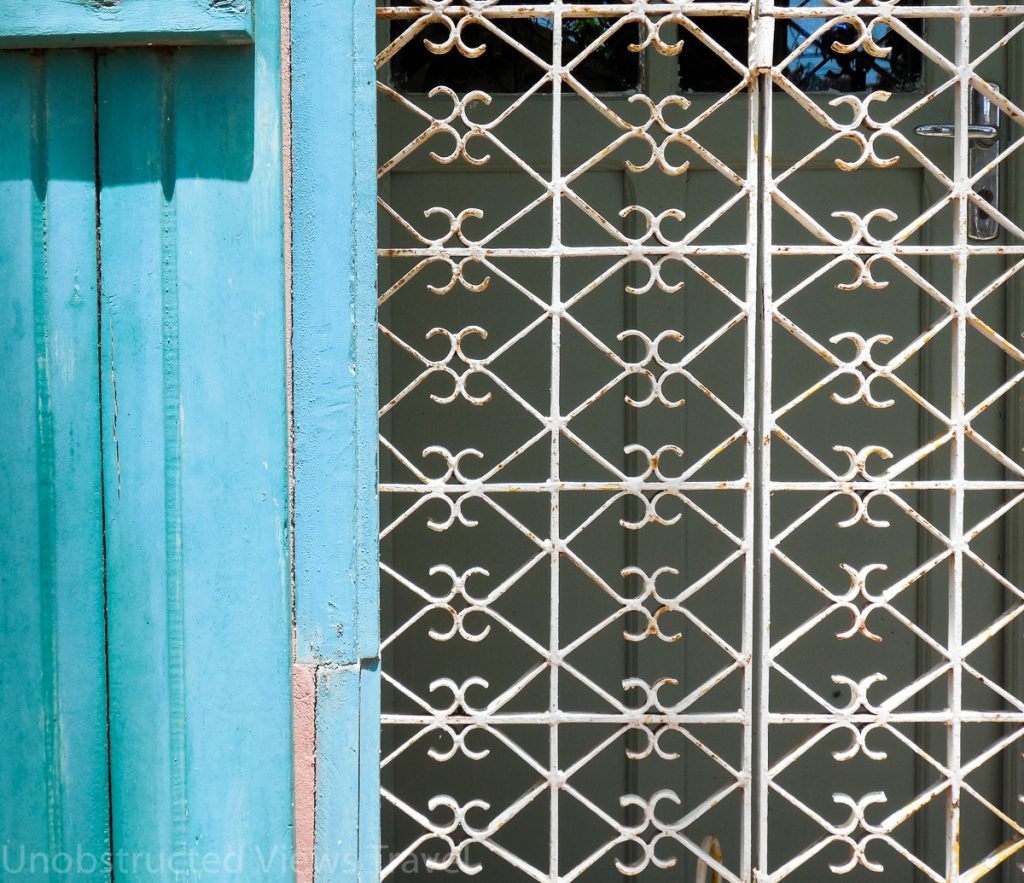 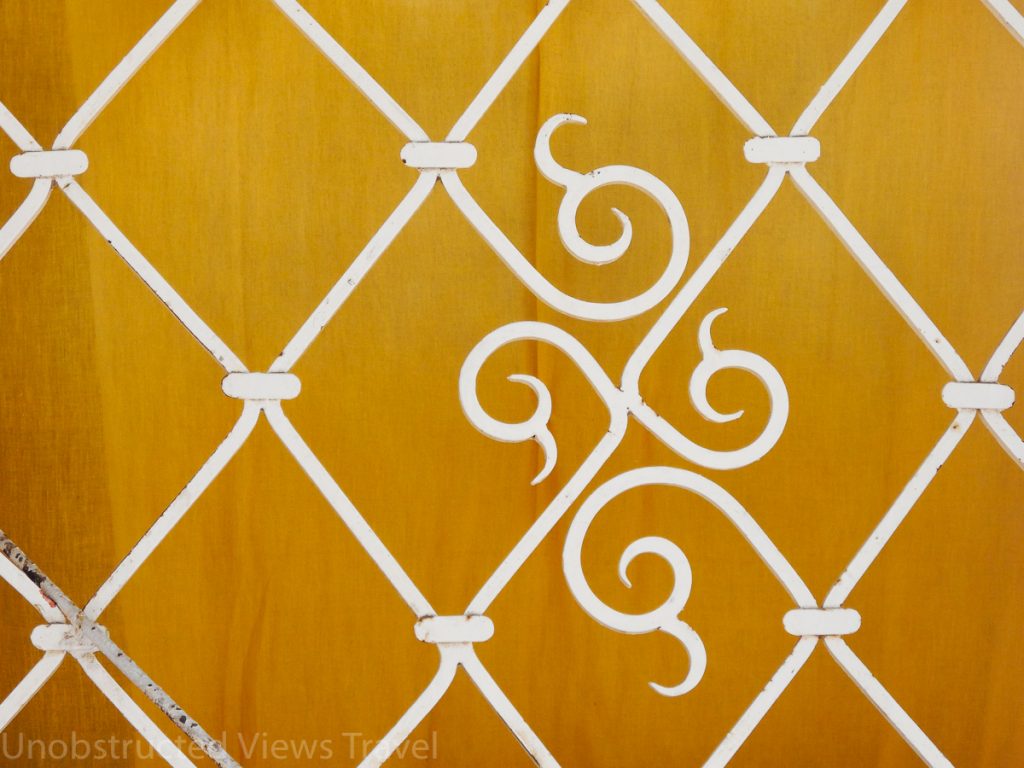 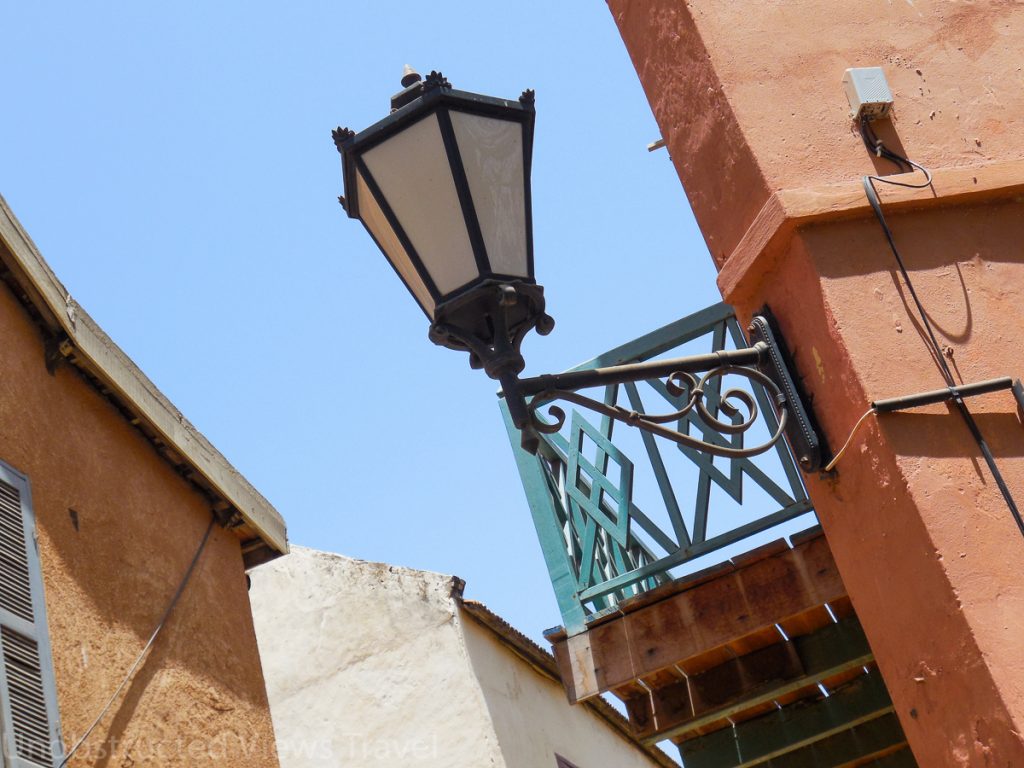 Just don’t buy anything from the people on the street. It’s better to support the artisans who actually pay taxes on the shops they set up, even if they are a bit aggressive. They really do make beautiful things.

After your visit, take a swim on the beach and grab a bite to eat.

We went on a Saturday, so there were tons of school groups there! When I went to swim, the kids were fascinated my me and my friends, since we were (obviously) very white, foreign, and we knew how to swim. Most children in Africa never learn how to swim. They begged us to teach them, so we did! We taught them to put their heads underwater to start with, and then I played with the younger girls while a friend taught some of the older ones how to freestyle and tread water. It was so fun! After lunch we went back to play with them more, and they decided that their favorite game was to get 2 or 3 of them together to make a sort of hammock with their arms, get somebody to sit on their “hammock” and rock them back and forth in the water like a swing. They wanted to do it over and over and over again, and at first I thought they were going to dump me headfirst in the water, but they didn’t. They asked me what my name was, and when I said Amy (pronounced the French way, like “ahh-mee”), which sounds like a shortened form of the Senegalese name Aminata or Amina, they asked me if I was Muslim (I’m not).

If you eat on Gorée, just be aware that the food is quite a bit more expensive than in Dakar. The food we got was very good (I had shrimp and grilled chicken with rice, and of course bissap), but the service was very slow. Extremely slow. And our tour guide stole my water bottle. So, it wasn’t the perfect end to the day, but Gorée was worth it!

One thought on “L’Ile de Gorée”