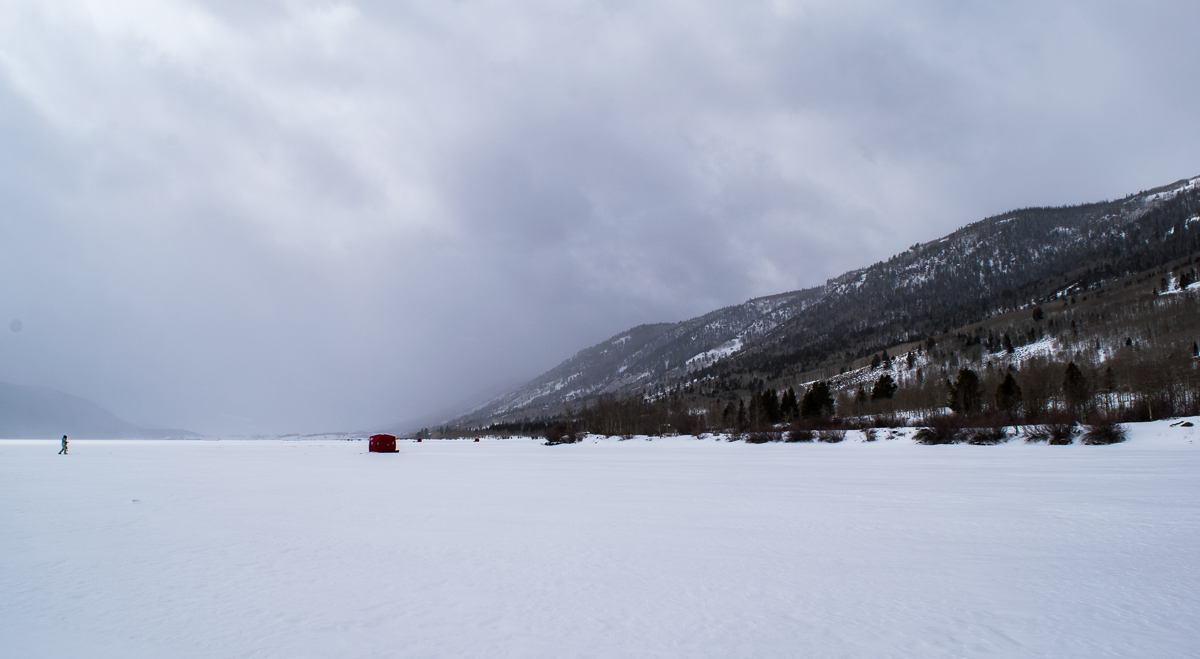 Saturday morning, I made my very first attempt at ice fishing, and only my second ever attempt at fishing in general. Please know that while I love to travel and I love nature, I am not an outdoorsy person. I rarely go hiking, I camp even less often, and I have never once been hunting. Still, I’m always down to go on a new adventure! When one of my professors invited a group of my classmates and I to go ice fishing this weekend at Fish Lake in southern Utah, I was the first to sign up.

We were told to dress warmly, to bring food and lots of water, and to meet on campus bright (dark?) and early on Saturday morning. I rolled, grudgingly, out of bed at 4:26 AM, with 3 hours of sleep  to go on and just enough time to get dressed and walk the twenty minutes to our meeting point. I layered up with as much warm clothing as I could find in my closet: a pair of thermal underwear, thermal leggings, thermal shirt, a wool sweater, my most durable denim Nudie jeans, two pairs of wool socks, my lined waterproof Kamik boots, a wool scarf, a fleece ear warmer, a knit hat, my winter coat, and, of course, two pairs of gloves.

It turns out twenty pounds of clothing wasn’t enough. I mean, I was just fine on the drive down. It was three hours long and I slept for most of it. When I wasn’t sleeping, I was listening to our professor point out what wildlife we could see in the dimly lit morning hours.

Unfortunately, as soon as we got to our destination, and I stepped out of the car, I immediately knew I hadn’t dressed warmly enough. The temperature in the valley was about 13ºF and windy, so it was already pretty cold, but the lake we went to was up in the mountains, and higher elevation means much lower temperatures! I don’t know the exact temperature, but with the strong winds and snow out on the lake, it felt close to 0º or below.

Even with all my layers and fleece and wool and thermal gear, it only took 15 minutes for my fingers to start hurting. Twenty minutes after that, they were in excruciating pain and my toes were starting to hurt, too. When I described the cold to my roommates that evening, they all exclaimed, “but you’re from Michigan!” It’s true I’m no stranger to cold, but this was almost unbearable.

In spite of the cold, we got straight to fishing, since that’s what we came to do! No way were we going to let the weather ruin our day. We drilled holes in the ice with an auger, each one about a foot wide and a meter or two away from other holes. The poles were smaller than the ones I had used the time I had gone fishing in the summer on a non-frozen lake. We used pieces of perch as bait, and then switched to earthworms when the fish weren’t biting.

To keep our extremities from needing to be amputated, we adopted any form of physical activity that could reasonably be done while wearing twenty pounds of clothing on a snow-covered lake while also keeping at least one eye on a fishing pole: running, walking in circles, jogging in place, jumping jacks, and dancing.

I don’t know if it was because the fish were lazy or if it was because I’m just really bad at fishing (I’m leaning towards the latter, since everyone else caught multiple fish), but it took me 4 hours to catch anything.

First we tried fishing near the edge of the lake, where apparently there are a lot of weeds, and you have to get your hook to be just above the bottom of the lake where the weeds are, and then you wait for fish to come up out of the weeds and bite your hook.

When fish weren’t biting, we moved out towards the center of the lake, where you drop your hook down about twenty feet (about half the depth of the lake at that point). I tried there for a while and got no bites, so I went back to the edge.

My professor wanted to help me, so he let me use his pole and his hole and gave me some pointers. This is what I learned about ice fishing from him: (disclaimer: they didn’t work for me, but maybe they will work for you? Anyway, these are all coming from an experienced ice fisher and a very intelligent man.)

We started at 8 AM and planned to stay until 6 or 7 PM, but it was so cold that we ended up leaving at 2. I wish it had been just a few degrees warmer; the actual fishing part was relaxing, and when I finally caught a fish (a medium-sized splake trout), I felt quite accomplished!

When I got home, I gave cleaning/filleting/cooking the fish my best shot. Since I’d never cleaned a fish before, I turned to Google and watched a few tutorials. Basically, you take out the guts, cut off the head, and then the easiest thing to do is to just cut along the spine on either side so you get little fish filets. I left the skin on, and baked them in the oven with lemon, lemon pepper and olive oil. It turned out pretty well!

And, the best part was, I could say that I’d caught and cooked it myself.