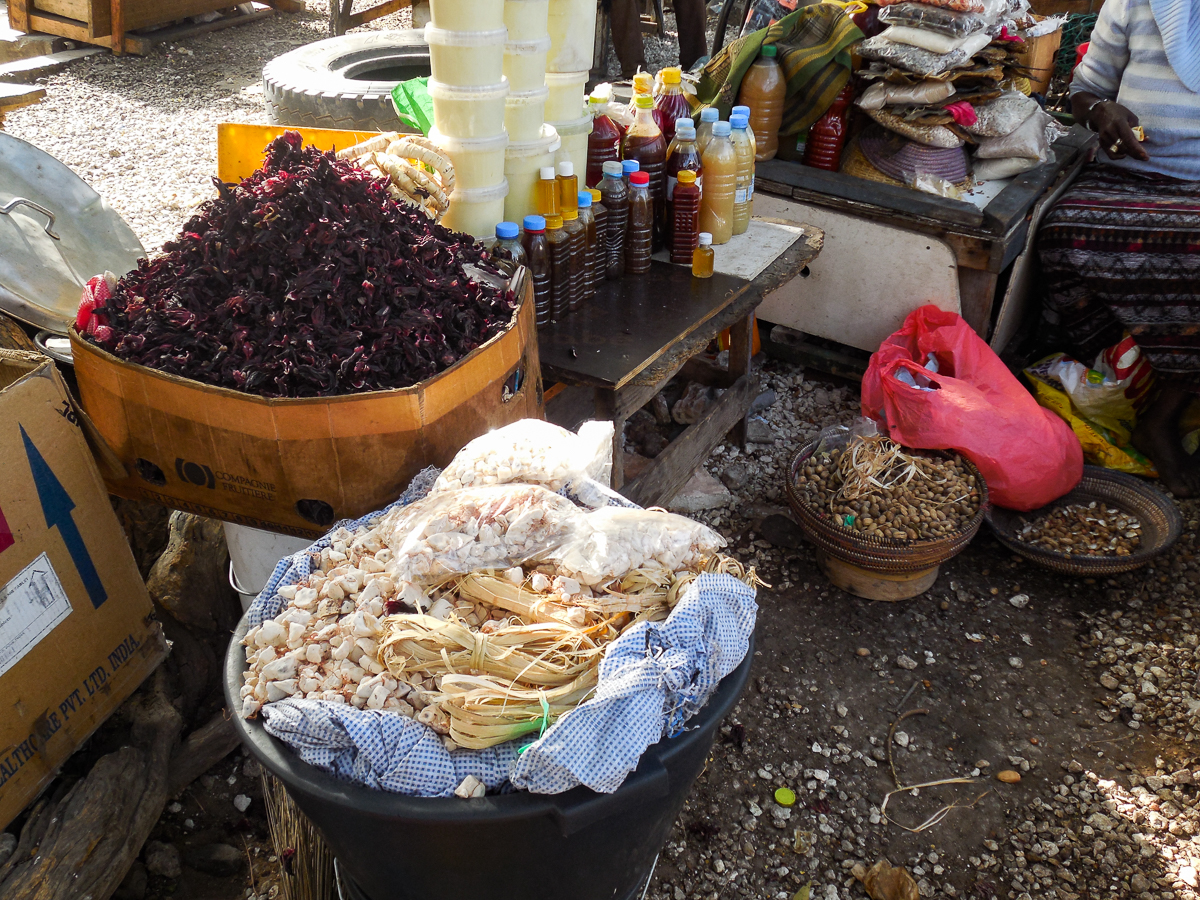 (above: red hibiscus flowers and pain de singe, or the fruit from the baobab tree)

Senegalese food is delicious! Though, it is sometimes just a little too spicy for my unaccustomed palate. Especially along the coast, the seafood is fresh, and well-prepared. We eat a lot of rice, a lot of beef and chicken, and a lot of millet, which was the grain that most people in Senegal used until the Europeans introduced rice. The fruit is also very flavorful. Here are some of my favorites:

This is the national dish of Senegal. It’s fish, usually thiouf, cooked around a spicy and flavorful paste. It’s served with either millet or brown rice and an assortment of steamed vegetables including eggplant, potato and carrot.

This is a dish usually reserved for ceremonies like weddings, funerals, and baptisms. It’s boiled millet served with sweet condensed milk and it is incredible.

Not a dish, but a drink! It’s a strong infusion of hibiscus flowers, made by boiling water, adding dried hibiscus flowers, sealing the container and letting it chill. The Senegalese add plenty of sugar to make it sweet, and often a bit of vanilla. It tastes like the best fruit juice I’ve ever had, though it’s not from a fruit. I plan to buy several sacks of the dried flowers so that I can make some at home.

Another drink, from the fruit of the baobab tree. The baobab fruit is very good for the digestion and other illnesses, apparently. It’s also very sweet, a little too sweet for me (I prefer the bissap), but since the baobab is the symbol of Senegal, its fruit juice merits a try.

How could I make a list of Senegalese food without including cous-cous? Impossible. Make sure you get the cous-cous sénégalais if you want the traditional one, since many places also sell Moroccan cous-cous. It’s little balls of grain that are cooked in water and often with spices, and served with a spicy sauce and often meat. Traditionally, you eat it with your hands, dipping 3 fingers in like a scoop, and everyone eats out of a community bowl. That’s the case with most family meals, but especially this.

Yassa is the name given to a sauce that is primarily composed of onions. You can order yassa poulet which is grilled chicken, rice, this sauce, and half a lime, or yassa poisson which is the same thing but with grilled fish. It’s usually inexpensive, and very good.

Senegal has delicious, ripe, fresh local fruits sold at small markets all over the place. If you went to Senegal and didn’t at least eat one juicy mango, you’d be making a huge mistake.  There are also some more exotic fruits that I hadn’t seen anywhere else, like the fruit of the cashew tree. We’re all familiar with the cashew nut, but did you know it grows attached to a fruit that is actually quite sweet? In Senegal, people eat the fruit plain and make juice out of it.

There was also this one time where our family served us spaghetti with scrambled egg omlettes, topped with ketchup. I have friends in college who tried to make a similar thing once! It actually tasted better than expected, probably because they cooked it with lots of different spices: spicy spices! But I’m pretty sure you can’t order omelette-ketchup spaghetti in a restaurant, and anyway I wouldn’t recommend it over all the other delicious options.