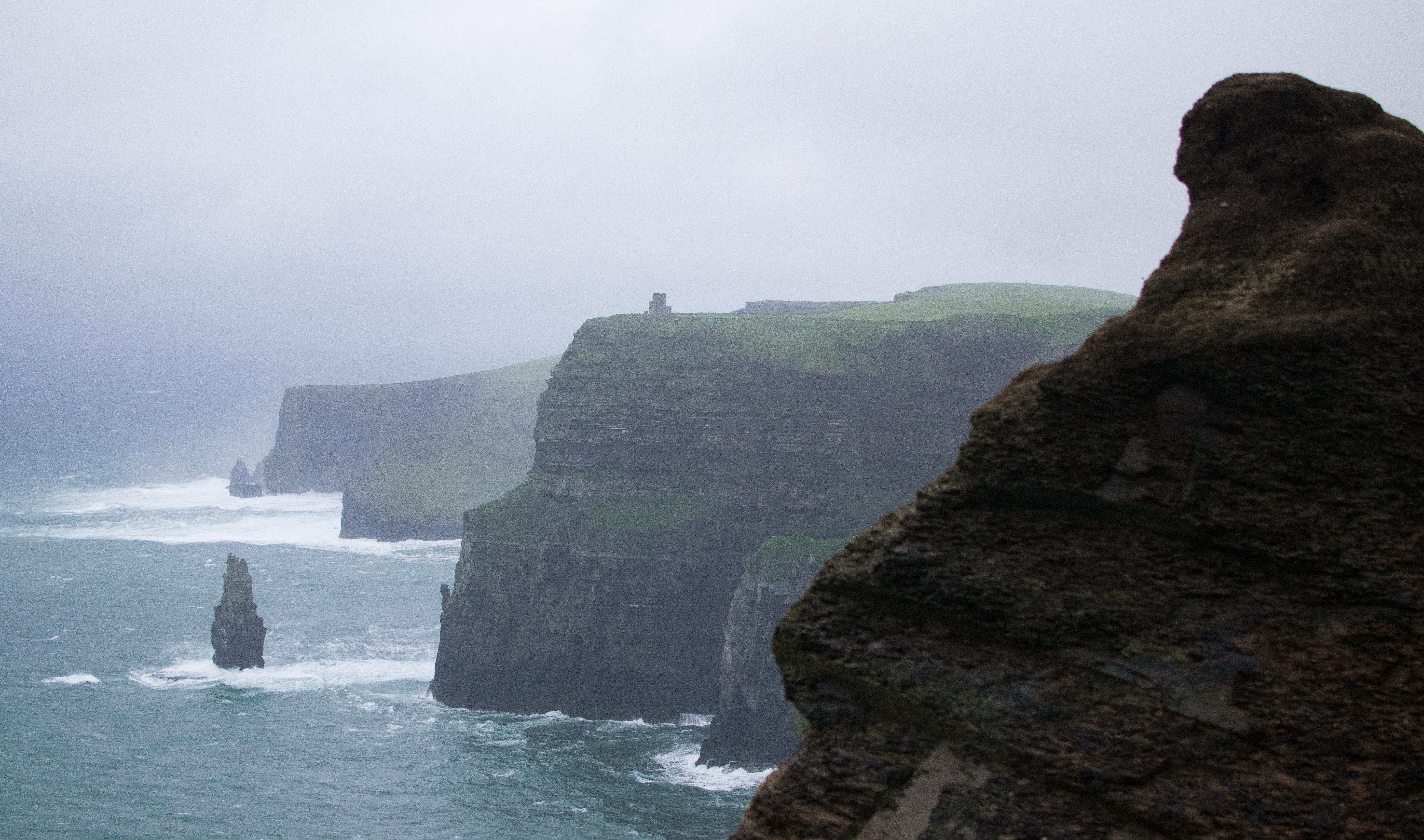 Harry Potter. The Princess Bride. These are just a two of the films that have featured the gorgeous and mysterious landscape officially known as the Cliffs of Moher. This last week I was lucky enough to walk along the edge of them, more than seven hundred feet above the ocean.

The cliffs of Moher are on the Atlantic coast of Ireland, in County Clare, not far from Galway and Doolin. The weather on the coast is unpredictable, so strong winds, rain and fog are common. The day I went, the sky was clear enough but gray, and there was a lot of fog, making it hard to see out as far as usual. On a clear day, you would be able to see the Aran islands, famous for their wool and knitwear, from O’Brien’s Tower.

People, this is an immensely gorgeous and awe inspiring place. If you ever go to Ireland, make this a priority. The pictures are beautiful (a professional landcape photographer’s would even be stunning), but the real thing will make you feel both extremely alive and incredibly insignificant. It’s pretty hard not to feel inspired when you’re standing on what feels like the edge of the world.

I guess that’s why a lot of famous people come here. Apparently I missed seeing John Travolta by one day. I mean, if I had a private jet and some extra time between all my famous person responsibilities, I would come here all the time! The cliffs get nearly a million tourists each year, but don’t be deterred by that. Most of them stay near the visitor’s center and O’Brien’s Tower, which isn’t far along the trail. The cliffs themselves, though, go on for five miles, and once you get even just a half a mile out, it’s not hard to find yourself relatively alone and undisturbed.

You may run into a wild photographer or a cow or two, though, so be prepared.

Getting to the cliffs

You can get there by public transportation (bus, train), or by rental car, but I opted for a guided tour. I’m not usually a guided tour person. In fact, I generally dislike them on principle. However, for this trip it seemed the most practical choice for me as a solo traveler on a budget, and it allowed me to easily do the trip in one day from Dublin and get back before too late.

The tour I did was with Galway Tour Company, and included transportation, a guided tour of Galway city, alone time for exploring the cliffs, a visit to some smaller, windier, wetter cliffs nearby, and lots of stories about the leprechauns and fairies.

If you know anything about Irish folklore, you know that it’s faerie country. Not like Tinkerbell. Like The Moorchild kind of faeries. Tricky ones that live underground and sometimes switch babies or curse your loved ones if you disturb their faerie rings or faerie trees. There are endless versions of how the belief in faeries started, but the superstition runs generations deep. The younger Irish you’d meet today probably aren’t very superstitious, but many of their grandparents would be.

In fact, the tradition runs so deep that even just a few years back (maybe a decade or so), that it stopped a commercial development from going up on a large piece of open land next to the highway. This was one of the spots we drove past on the way to Galway from Dublin, so I saw it. The company that bought the land hired a bunch of people to clear it and get it ready for construction. So, they cleared it all, except for one tree. The company insisted that the tree be removed since the structure couldn’t be built around it, but the workers refused. The company tried everything to get the workers to remove the tree (raises, pressure, threats of being fired), but the Irish workers absolutely refused to touch the tree. In the end, the tree was never moved, the complex was never built, and the highway still curves around the only tree standing in a solitary field.

If you hadn’t guessed it already, yes, that was a fairy tree. A white hemlock. The legend says that the trees make up the ceiling for faerie communities underground, and they don’t like it when you disturb them. Anyone who moves or takes down a faerie tree will either die or lose a loved one within twenty-four hours. No one working on that construction project was willing to risk it, whether or not they truly believed in faeries.

Once we had heard all the stories and crossed the entire country of Ireland, we arrived at the coast. First, we took a tour of Galway city and learned some of the history. Galway’s history was mostly sad, as is much of Irish history. Even most of the happier stories still included some death, fire and various other disasters.

We also heard the history of the Claddagh ring, which originally comes from near that area.

After getting the low-down on the history of Galway, we got back on the bus and headed off to Doolin and the cliffs. I was a couple minutes late getting back to the bus because I stopped to take some pictures, so they made me sing for the entire tour group. That was fun. There was a Spanish family that felt bad that I had had to sing, so they shared their Spanish snacks with me which was really nice.

We stopped in Doolin for lunch and then went straight on to the visitor’s center. I looked through it a little bit but didn’t see much interesting except some cool pictures of the cliffs (which paled in comparison to the actual thing anyway) and a display showing what the Earth will look like in 2050, specifically where the oceans will cover the land and how many cities will be underwater. Spoiler alert: it’s a lot of them. Major ones, too.

The cliff trail was very nice. I first walked up near O’Brien’s tower to get a good view of the left cliffs (where Harry Potter and the Half-Blood Prince was filmed: the scenes where Dumbledore and Harry find the horcrux under the potion in the creepy dark cave with all the re-animated dead people). They of course did not let us in the cave.

Then I walked the other direction, along the left cliffs. After getting about 10 minutes out, the crowd really thinned out and even though I could still see people, it was pretty quiet and pleasant. There were a lot of cows just grazing in a field to the inside of the trail. That was also nice to see. On the drive over as well, there were hundreds of small local farms with cows and sheep and horses just hanging out in giant pastures all day every day. Pretty cool.

Anyway, the cliffs are just jaw-droppingly gorgeous. I cannot accurately describe them. It really did feel like standing on the edge of the world.

I didn’t stand on the actual edge, though, because that would have been incredibly dangerous. People die there all the time. While I was there, a guy walked up to the edge and another man started to follow him, and then the wind took the first guy’s hat. It was so fast, one second the hat was on his head and the next it was just a tiny speck out over the ocean. The first guy backed up a little and the second guy just said “nope, not worth it!” and walked straight back to the path.

My only accident was that I found – and fell into – what was probably a leprechaun hole. My shoes got a little muddy because of that and because of all the rain.

Here are some final photos of the cliffs and of the smaller cliffs nearby:

Now go re-watch one of the above movies or do a Google search for some other ones or a music video that features them.