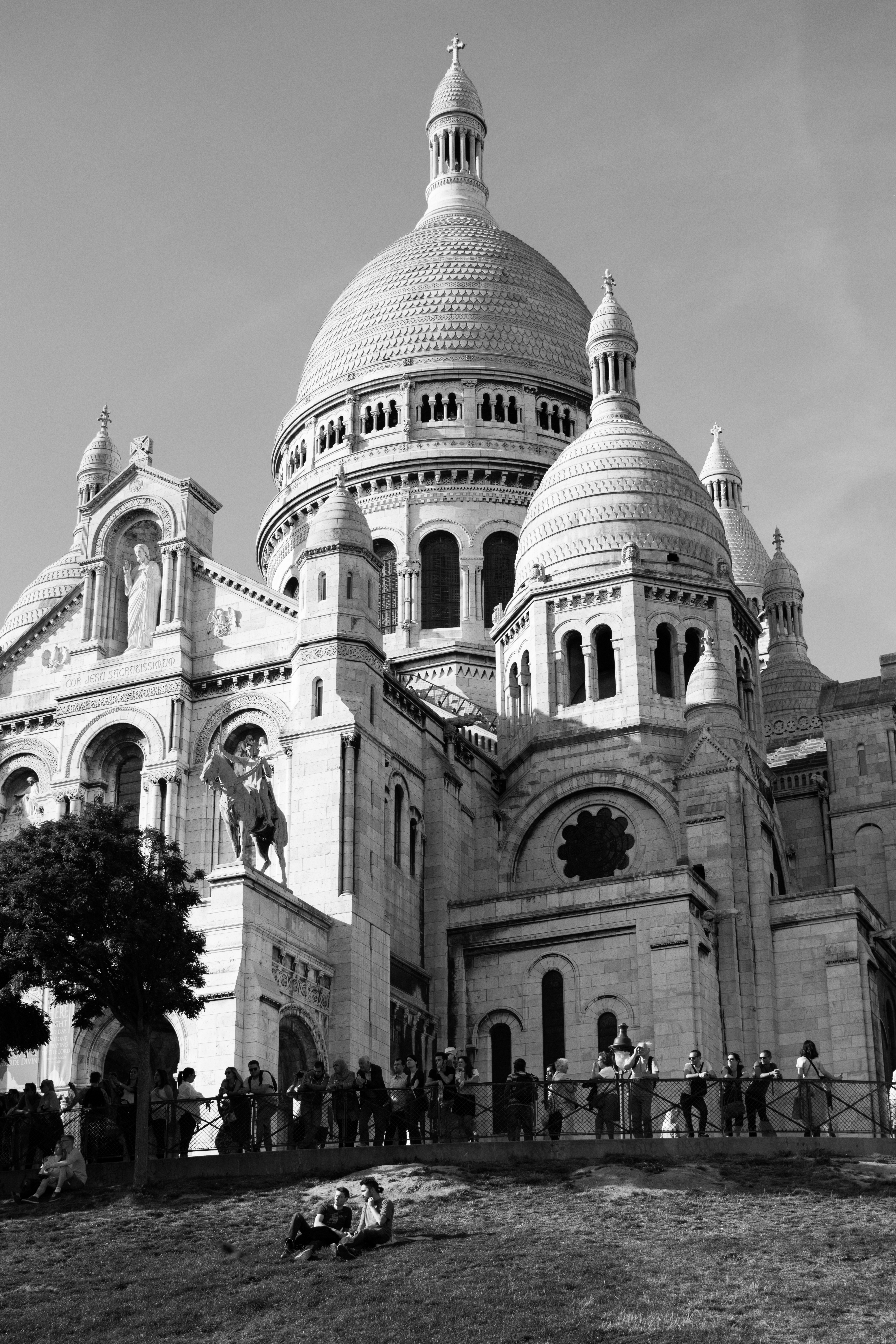 Montmartre and the Sacré Coeur basilica

Saturday afternoon, we decided to visit the Sacré Coeur basilica and the surrounding area, Montmartre. That decision came when, after some plans fell through, we realized it was too late in the day to go to Fontainebleau, a palace just outside Paris.

Montmartre is known as the art district of Paris, because of the large number of artists that used to gather there. Now, since most of it has become a tourist hotspot, there aren’t as many artists around, but you can still see their influence.

Even if you haven’t been to Paris, the streets of Montmartre would probably look familiar, thanks to the numerous films and videos that feature it. Amélie is among the most famous of these. Ellie Goulding also has a music video with some amazing shots of the streets at night, in which she walks around in stilettos on the cobblestone. It looks cool, but please don’t try that at home!

Montmartre is essentially a large hill. The name of it means “Mount of Mars,” named for the Roman god of war. At the top of it rests the Sacré Coeur basilica, which was built at the end of the Franco Prussian war. It was a sign of penance for France’s defeat and for the lives lost in the war and during the Paris Commune of 1871.

The first time I went to Montmartre, I decided to walk up the steps instead of taking the funicular. Unfortunately, I got distracted by some interesting thing or another and ended up lost. If you get lost in Montmartre, don’t assume that walking uphill every chance you get will eventually lead you to the top of the mountain. It won’t. Or at least, it won’t get you there in less than a few hours.

If you’re not as easily distracted as me, getting to the top is easy! This time, we took the metro to the stop at Abbesses, and the funicular was just across the street. The stairs went right along side the funicular tracks and only took a few minutes to climb. Either way, you’ll end up right at the base of the basilica, where street performers and groups of people like to gather to enjoy the view of Paris. Just below them and to the left, there are pretty paths that wind down through a garden.

Of course, a visit to the inside of the basilica is a must. It’s open to the public, though they do ask that visitors refrain from taking photos and be respectful of ongoing religious services. It’s a beautiful place to sit and admire the architecture, reflect, or pray. If you take the stairs down by the altar, there’s a basement area that’s pretty neat.

If you have the time, climbing the dome would be fun. I didn’t do it this time, but since the view of Paris was beautiful enough from the ground floor, I can imagine how stunning it would be from even higher up.

The streets of Montmartre

Honestly, after having gotten lost one time and having gone straight to Sacré Coeur the other time, if I were to do it again, I would wander. I would just take a map with me so that I could find my way back.

If you don’t have a lot of time, going straight to Sacré Coeur is quick and easy. However, the real charm of Montmartre is in the streets, especially once you get away from the tourist part that centers around Abbesses. By getting off at Anvers or Blanche, you get to see more of the neighborhood on your way up, and you never know what you’ll find! It’s best to do your wandering in the daylight, though.

If you’re one of those people who needs to have a plan and a destination, try stopping by some of the other attractions in the area. There are plenty of them. Some of the more notable ones are the Dalí museum, the church of St. Pierre, and the Montmartre cemetery. If you’re a fan of the movie Amélie, you can visit the Café des Deux Moulins and grab a bite to eat. There is also a squash club where I once got my fingerprints taken for a Spanish visa, but it’s not really something I’d recommend visiting. That is, unless playing squash is your thing; in that case, more power to you.

Though we took the straight shot to Sacré Coeur this time, wandering the streets is exactly what we did after visiting the basilica. We saw quite a few street performers in the more populated section, and when we got out a little farther from the tourist area, we saw some smaller boutiques, a fish market, and a lot fewer people. We didn’t really do anything on the way down, but man, was it gorgeous.

At the base of the hill is the famous Moulin Rouge. It’s not the safest place to go wandering around at night (especially if you’re alone and female), but during the day it’s perfectly safe. There’s not much to see around it, but it’s near the metro station so it’s worth passing by on your way out of Montmartre. That’s what we did.

All in all, it was a great evening trip! After dinner, we went back up to see the view at night, but I’ll write more about that later.